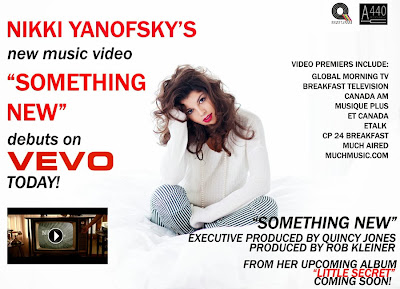 Nikki Yanofsky is best known for her 2010 Vancouver Winter Olympics performance of the Canadian Winter Olympic Anthem, "I Believe," a song that was certified five times platinum for digital downloads in April 2010. Now at 19, Nikki is a seasoned live performer, and is embarking on her 5th Canadian tour. "Little Secret" is Nikki's 3rd release for Universal Music Canada, is Executive Produced by Quincy Jones and Rod Tempterton, and will be released in October.

In the meantime, you can check Nikki, a Quincy Jones' protégé, singing an amazing version of the jazz standard "Air Mail Special" on this recently released 3D Blu-ray disc, "Experience Montreux":

Posted by Arnaldo DeSouteiro at 12:58 AM