Films of the Month (DVD) - "Carnival of Crime / The Hostage" 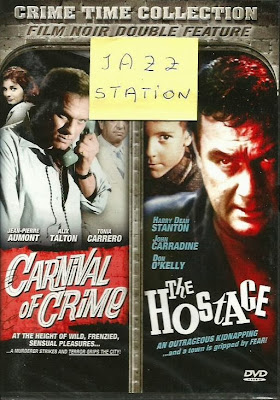 "Carnival of Crime" (1964/B&W/91m) - A four-alarm murder mystery, aka "Sócio de Alcova," this nerve-tingling story (filmed in Brazil in 1962 and later released here in the USA in 1964) is about a dashing, prominent builder who is mistakenly accused of killing his wife, but because of it learns the truth about the woman he thought he knew. Starring Jean-Pierre Aumont (one of France's most famous leading men, "Day for Night"), Tonia Carrero and Alex Talton.

"The Hostage Theme" composed by Roland Hanna and sung by Steve Smith
Posted by Arnaldo DeSouteiro at 12:10 AM