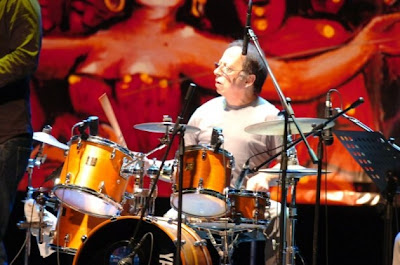 Another huge loss for the fusion world and for those who love and speak the language of "universal music": the fabulous drummer for such groups as Los Shakers and OPA, Osvaldo Fattoruso -- aka Jorge Osvaldo Fattoruso aka George Fattoruso (as his name appeared in most of the albums he recorded in the USA during the 70s with OPA, Airto, Flora Purim, Toninho Horta and others) -- passed away at age 64 after a long battle against cancer.

I grew up listening to the two outstanding OPA albums for Milestone, "Goldenwings" and "Magic Time," which I had the honor to produce for reissue on CD in the USA back in 1997, having also written extended liner notes for the booklet. Alongside his brother, genius keyboardist Hugo Fattoruso and the great bassist Ringo Thielmann, Osvaldo recorded some of the most adventure, inspired and creative fusion masterpieces ever. Rest in Peace.

Posted by Arnaldo DeSouteiro at 4:09 PM