...and Gerry Mulligan/Chet Baker's historic reunion concert comes out on CD in Europe 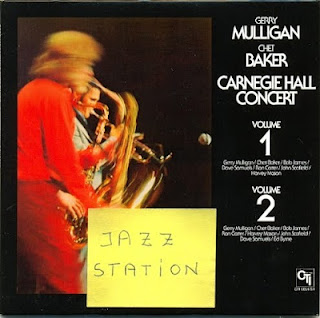 A new CD issue of "Gerry Mulligan/Chet Baker: Carnegie Hall Concert" just came out in Europe, on papersleeve format. The front cover (as shown above) is a little different from all previous digital issues, since it mentions "Volume 1" and "Volume 2," and also includes the names of the musicians who appeared in each of the original vinyls.

The back cover brings the titles of the eight tracks, as well as that info "Distributed by Motown Record Corp." used in the CTI jackets after the label entered a distribution agreement with Motown in 1974. There's no liner cover, though, which means that Doug Ramsey's text was deleted.

For those not familiar to this great CTI album, that November 24, 1974 night at Carnegie Hall was more than a concert; it became a media event, celebrating the first Mulligan/Baker reunion since their heyday in the 50s, when they became the top act of the so-called West Coast Jazz.

The tracklist includes "Line For Lyons," "(Song) For An Unfinished Woman," "My Funny Valentine," (sung by Chet Baker, obviously), Mulligan's haunting ballad "Song For Strayhorn," "It's Sandy At The Beach," Bernie Miller's "Bernie's Tune," the terrific "-4 Pacific," and Harry Warren's lovely standard "There Will Never Be Another You," another feature for Chet Baker's unmistakable vocal style.

According to CTI historian Doug Payne, "the above titles come from a concert featuring Baker, Mulligan, Stan Getz and each of their groups individually. Baker's group included Bob James on piano, Ron Carter on bass, Harvey Mason on drums, and Ed Byrne on trombone. Mulligan used the same rhythm section, adding vibist Dave Samuels, guitarist John Scofield and sometimes Baker. Getz - who is not present on the issued titles but whose tenor sax is clearly visible on the cover photo (and confirmed by Gerry Mulligan) - was joined by his own group, highlighted by drummer Buddy Rich and four female singers during one number."

Let's hope that, someday/somehow, the "lost" Getz tracks will also see the light of the day. Something possible by now, since Getz was signed to Columbia (now Sony Music) at the time of the concert, and the label also became owner of all the CTI catalog from the 70s. 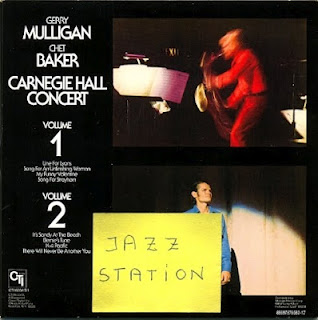 Posted by Arnaldo DeSouteiro at 5:42 PM