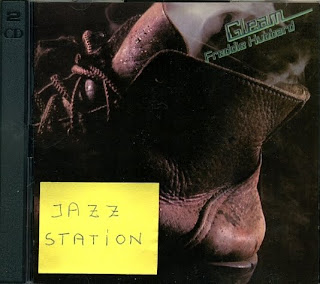 The first CD reissue ever of Freddie Hubbard's rarest album, "Gleam," previously released only once, in 1975, and only in Japan as a 2-LP set. Includes a dreamy flugel-Rhodes duo on The Stylistics' "Betcha By Golly Wow" (previously recorded for the CTI album "Polar AC"), a ferocious take on "Spirits of Trane" (a tribute to John Coltrane originally available on "Keep Your Soul Together," another CTI session), plus 5 inspired renditions of songs from his Columbia days: the funkyfied "Put It In The Pocket" (without the vocals heard on the studio version), the spaced-out "Ebony Moondreams," the Afro-tinged "Kuntu," David Nichtern's "Midnight at The Oasis" turned into a hit by Maria Muldaur, and Stevie Wonder's glorious "Too High."

Posted by Arnaldo DeSouteiro at 11:02 PM