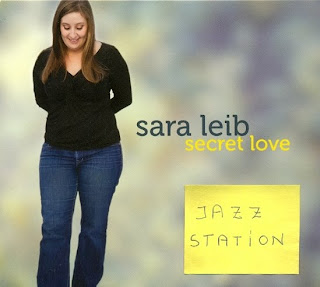 At its core, jazz is a music of personal expression, a concept that singer Sara Leib clearly embraces. On her new CD, "Secret Love," -- the glowing-toned mezzo-soprano gives an array of classic and contemporary material fresh, distinctive sounds.

One way that Los Angeles native Leib gives a new slant to her repertoire is to render some tunes in unusual time signatures. Cole Porter's "Night and Day" switches from 6/4 to 5/4 every eight bars, while Rodgers and Hammerstein's "It Might as Well Be Spring" has one bar of 6/4, then one of 5/4. Sammy Fain and Paul Francis Webster's title track alternates between 7/4 and 4/4. (Each was originally written in 4/4.)

Some songs are slightly reworked, with "So This Is Love," Al Hoffman's waltz for the Disney classic film Cinderella, done as a samba, and Ann Ronell's evergreen blues ballad, "Willow Weep for Me," given a boisterous funk arrangement.

The CD also contains more straightforward readings, like Bob Dylan's "Make You Feel My Love," Ben Harper's "With My Own Two Hands," and the ballad, "The Way You Behold," written by Jonathan Richards with lyrics by Leib. Leib arranged all the songs save the title track, which was conceived by two friends from her undergrad days at the New England Conservatory of Music: pianist Jed Wilson and vocalist Heather Masse, now a member of the Wailin' Jennys.

"I never really set out to go, 'I'm gonna make this more complex,'" Leib says of the CD's direction. "I started to think that if I'm gonna do a song, I should do it in a way that's a little bit original. I don't think the idea necessarily is to make something more complex, but to come up with some sort of theme or some way that I think might reflect the meaning of the lyrics in a different way, either more true, less true, more sarcastic, reinterpreted."

A crew of top young jazz musicians plays on "Secret Love," which was overseen by veteran producer Matt Pierson and which was recorded in New York City. The participants include pianists Taylor Eigsti and Aaron Parks, bassist Harish Raghavan, and drummer Eric Harland; tenor saxophonist Dayna Stephens appears on four tracks, hand percussionist Richie Barshay on five. Throughout, the musicians deliver poised accompaniment and offer provocative solos. "I was really lucky that they all said yes," notes Leib.

"Based on her previous recording and word of mouth from other musicians, I knew that Sara clearly had talent," says producer Pierson. "However, I wasn't prepared for what happened once we got into the studio. She just blew me away with her infectious spirit, pure musicianship, and incredibly deep sense of swing. But what really set her apart was her ability to integrate herself into the band, going toe-to-toe with some of the greatest instrumentalists on the jazz scene today."

Sara Leib was born in Los Angeles December 21, 1981; her father was a furniture designer, her mother a social worker. Her older brother played trumpet; years later, she mimicked the instrument's tone during wordless choruses on her first CD, 2003's self-released and warmly received "It's Not the Moon."

Leib attended L.A.'s prestigious Hamilton Music Academy, where she sang in the jazz choir and also gained a berth in the Grammy High School Jazz Choir. After two years at the Berklee College of Music in Boston, she transferred to the New England Conservatory, studying with Dominique Eade, Steve Lacy, and Jerry Bergonzi and earning a B.M. in Jazz Performance, followed by an M.M. in Jazz from the University of Southern California. She has performed throughout the world, and currently teaches at the Los Angeles Music Academy College of Music in Pasadena. Leib also gives private voice lessons and teaches classes in improvisation, singing for instrumentalists, and chart writing.

Given its depth and originality, "Secret Love" is poised to raise Sara Leib's international jazz profile.