Instrumental CD of the Month - "Hailey Niswanger: The Keeper" 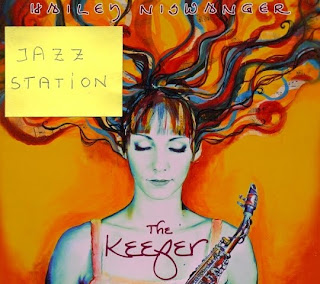 Hailey Niswanger created an indelible impression in the jazz world with the release of her 2009 debut, "Confeddie." Then 19, the saxophonist was even the subject of an enthusiastic Wall Street Journal profile by veteran jazz critic Nat Hentoff. The headline read: "This Teenager Has Got It." Now 22, freshly graduated from the Berklee College of Music and newly residing in New York City, the alto and soprano saxophone dynamo has released her second CD, "The Keeper" (Calmit Productions), on April 24.

Unlike many of her jazz musician contemporaries, Niswanger (pronounced "NICE-wonger") unabashedly embraces the deep traditions of jazz. "Today you see a lot of artists mixing and mashing genres, but I want to stay true to jazz, I want to honor it," says Niswanger, a native of Houston who was raised in Portland, Oregon. "While I listen to all kinds of music -- classical, jazz, R&B, hip-hop -- I want to be known primarily as a jazz artist." "The Keeper" certainly backs up that aim.

The CD includes eight engaging Niswanger compositions, reflecting a wealth of modern and contemporary jazz moods, as well as classics by Miles Davis, Thelonious Monk, and Cole Porter. Her colleagues on the session are pianist Takeshi Ohbayashi, bassist Max Moran, and drummer Mark Whitfield Jr., plus, on three selections, guest trumpeter Darren Barrett. These inventive musicians are all associates from her days at Berklee, where she completed her B.Mus. in Jazz Performance late last year.

The time-shifting title track (and the album itself) is dedicated to Jeff Cumpston, her high school band director who died in a traffic accident in Zimbabwe, where he taught elementary school. The percolating "Straight Up," which reveals, as elsewhere, what an amazingly mature player Niswanger is on both alto and soprano, was written for onetime Eddie Harris trumpeter Thara Memory, an afterschool arts program instructor during her high school days. "He changed my life, speaking exactly what he felt about my playing, my behavior, everything," says the composer.

My personal favorite track, the sweetly-swinging "Norman," which showcases Niswanger's rich alto sound, is for 94-year-old Portland resident Norman Leyden, who has been an influence since the saxophonist was 10; "'B' Happy," a potent blues written for two beloved childhood toys, spotlights the crisp work of drummer Whitfield -- to whom the buoyant waltz, "Balance," is dedicated.

Speaking of pianist Ohbayashi, she could be describing the contributions of all her bandmates: "No matter what direction I decide to go in, I know he's going to pull through brilliantly." He does, and they do. Hailey Niswanger began her musical life with piano at age 5, then took up clarinet at age 8 and saxophone at age 10. She also played accordion for several years. "I was playing all the time," she says.

After graduating from Portland's West Linn High School in 2008, she entered Berklee. There she was named a member of the inaugural class (as were her bandmates Ohbayashi and Whitfield) of the Berklee Global Jazz Institute, under the artistic direction of Danilo Perez. In 2009, Niswanger became the alto saxophonist in Boston's eclectic Either/Orchestra, a position previously held by Miguel Zenon and Jaleel Shaw. The first female member of the band in its 25-year history, Hailey remained with E/O until early 2012, when she moved to Brooklyn to focus on recording and developing the next phase of what is sure to be a brilliant career.

Hailey Niswanger is looking forward to an appearance at the Saratoga (NY) Jazz Festival, Sat. 6/30 (12:15 pm), with other dates to be announced very soon. <
Web Site: http://www.haileyniswanger.com/
Posted by Arnaldo DeSouteiro at 11:01 PM