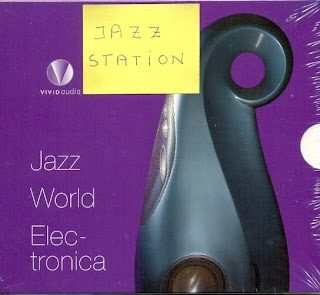 At the centre of JAZZ are Brazil's revolutionary vocalist Flora Purim, her sister Yana Purim (performing a duet with guitarist Quarteto Novo's guitar legend Heraldo do Monte on "Romance de Amor," a track inspired by Paul Desmond's version on his CTI masterpiece "Skylark" album), Flora's husband - percussion genius Airto Moreira - and artists who came to the label because of a direct or indirect involvement with them. Airto and his participation in many projects laid the musical foundation and direction of MELT 2000. As a consequence of the artistic freedom granted by the label boss Robert Trunz unique new styles and collaborations in the 90's evolved with a.o. the cream of UK Acid Jazz like Byron Wallen, Andrew Missingham & keyboard wiz Jessica Lauren. The label's work, under the initial guidance of Airto Moreira, is represented by late South African heroes like Sipho Gumede & Moses Taiwa Molelekwa who were strong pillars of the 90's resurgence of a vibrant local Jazz scene that led to the birth of the Cape Town Jazz Festival. Airto Moreira's 1989 sessions with his Miles Davis era mates Herbie Hancock & Stanley Clarke in Santa Barbara were released in 1994 and Sterophile chose the track “Nevermind” for their Test CD 3.

Many of MELT 2000's South African WORLD artists joined the label as a result of Robert Trunz's dedicated work in the new democratic era between 1993 and 2009 to promote the suppressed or largely ignored musical heritage of the many South and Southern African tribes. This compilation features songs by the late Zulu diva and songbird Busi Mhlongo, the angelic voice of Lungiswa from Cape Town who appears on a recording with Swiss guitarist Max Lässer.
Madala Kunene, Mabi Thobejane, Amampondo and Shiyani Ngcobo are well travelled and these days highly respected guardians of traditional music - a heritage long ignored in South Africa until globally promoted by MELT 2000. Tuvan throat singing is one particular variant of overtone singing practiced by the Tuva people of southern Siberia. Shaman and overtone singer Boris Salchack & Christy Doran worked with Airto Moreira on a unique album from which we present a track herewith.

Airto not only produced Ricky Olombelo's album - an amazing singer and percussionist from Madagascar but also took it upon him to help promote the music of the lesser known Brazilian region of Pernambuco with folkloric groups like the Banda de Pifanos - all presented on this compilation. Deepak Ram came to the attention of the World Music lovers with KITU - a track produced and licensed by MELT 2000 for the first in a series of famous BUDDHA BAR compilations which established World Music and its ambient and electronic derivatives in millions of homes across the globe.

The Electriconica MELT adventure into melting world music with electronic beats started with the 1996 release of the epic album Music With No Name Vol.1 featuring remixes by Smith & Mighty and Spring Heel Jack. Inspired by the remix pioneers of the Northern hemisphere young South African producers started KWAITO first and then evolved into Deep House which by 2008 became No.1 seller with rising international star Black Coffee, a forming member of the early S.H.A.N.A. Group. After Busi Mhlongo lost her fight against breast cancer the nation's young artist queued to remix her work following a trail of earlier Busi remixes by Soul II Black, Monde Mkhizwana, Castro B and Black Coffee riding the airwaves in South Africa. Other successful local SA artist in the Electronica section include Moses Taiwa Molelekwa, Kalahari Surfers and Pops Mohamed. The hip-hop, trip-hop sector is represented by LA outfit Eyedentity formed by Diana Booker (Airto & Flora's multi-talented daughter) and her husband Krishna Booker (Walter Booker's soon), aka Chill Factor and praised for his recent work with Sergio Mendes.
Posted by Arnaldo DeSouteiro at 2:15 PM