"Heavy Weather," one of my favorite Weather Report albums, has just been selected to the Grammy Hall of Fame. Also on the list are the Creed Taylor-produced Ray Charles' "Genius + Soul + Jazz," Bill Evans' landmark trio date "Sunday at the Village Vanguard" (with Scott LaFaro & Paul Motian), and Keith Jarrett's solo masterpiece "The Köln Concert." More details & complete list below. 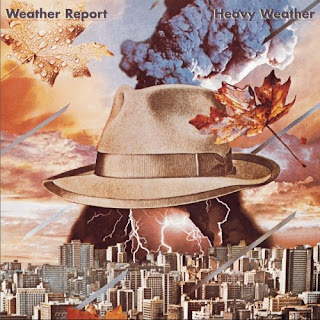 Press-release:
SANTA MONICA, Calif., Dec. 7, 2010 -- In continuing its mission to preserve and celebrate music year-round, the Recording Academy announces the newest additions to its legendary Grammy Hall of Fame collection. Established by the Academy's National Trustees in 1973, the Grammy Hall of Fame was created to honor recordings of lasting qualitative or historical significance that are at least 25 years old. Recordings are reviewed annually by a special member committee of eminent and knowledgeable professionals from all branches of the recording arts, and final approval is made by the Recording Academy Trustees. With 30 new titles, the list currently totals 881 and is displayed at the Grammy Museum.

"The Grammy Hall of Fame represents all genres of music, acknowledging the diversity of musical expression for which the Academy has become renowned," said Neil Portnow, President/CEO of the Recording Academy. "These musical treasures have brought us timeless recordings, and each of them deserves to be memorialized. These recordings are living evidence that music remains an indelible part of our culture."

This dynamic group of inductees range from the Beatles' "Penny Lane" to the Jackson 5's "I'll Be There." Other recordings include Al Jolson's "My Mammy," the Marvelettes' "Hey Mr. Postman," Willie Nelson's "On the Road Again," the original Broadway cast recording of "Brigadoon," Prince and the Revolution's "Purple Rain," and Otis Redding's "I've Been Loving You Too Long." Other inductees with selections include Joan Baez, Mildred Bailey, Ray Charles, Jimmy Cliff, Fats Domino, Duke Ellington and His Famous Orchestra, Al Green, Sergei Rachmaninoff, and Hank Williams with His Drifting Cowboys, among others.

For more information about the Grammy Hall of Fame or the 53rd Annual Grammy Awards (to be broadcast live on Feb. 13, 2011 at 8 p.m. ET/PT on the CBS Television Network), please visit www.Grammy.com. For updates and breaking news, please visit the Recording Academy's social networks on Twitter and Facebook: twitter.com/theGrammys, and facebook.com/theGrammys.
For a complete list of Grammy Hall of Fame inductees, please go to http://www2.grammy.com/Recording_Academy/Awards/Hall_Of_Fame/

Established in 1957, the Recording Academy is an organization of musicians, producers, engineers and recording professionals that is dedicated to improving the cultural condition and quality of life for music and its makers. Internationally known for the Grammy Awards -- the preeminent peer-recognized award for musical excellence and the most credible brand in music -- the Recording Academy is responsible for groundbreaking professional development, cultural enrichment, advocacy, education and human services programs. The Academy continues to focus on its mission of recognizing musical excellence, advocating for the well-being of music makers and ensuring music remains an indelible part of our culture. For more information about the Academy, please visit Grammy.com. For breaking news and exclusive content, join the organization's social networks as a Twitter follower at twitter.com/theGrammys, a Facebook fan at facebook.com/theGrammys, and a YouTube channel subscriber at youtube.com/theGrammys.