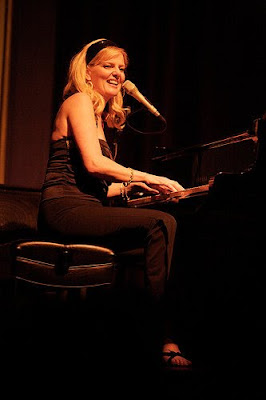 An internationally acclaimed singer and pianist, whose expressive vocal styling and dynamic stage presence have captivated audiences around the world, singer/pianist Carol Welsman has sold over 60,000 CDs in Canada alone, something few jazz artists in Canada have experienced.

See Carol in action once and you'll never forget her. Tall and blonde, she sits poised at the piano, head back, fingers stretched over the keys, her slender body arched in a seductive curve. Then the music flows, a combination of voice and piano that seems symbiotically linked. Like bossa nova icon Joao Gilberto and his guitar, Carol's honey and whiskey sound and her crisp, rhythmically articulate piano lines seem an integral part of each other. At a time when female jazz singers have been arriving in waves, she is that rarity -- an authentic vocal/instrumental artist who brings an irresistible blend of musicality and lyrical insight to everything she touches.

Carol's focus upon the essential elements of her art is not surprising. Coming from a musical family (her grandfather was the founder and first conductor of the Toronto Symphony), she has studied in the U.S. (at Berklee College of Music) and Europe, and released seven albums since her first CD, "Lucky To Be Me," in 1995. Her numerous achievements include the receipt of five Juno (Canadian Grammy) Award nominations including the just announced “Jazz Album of the Year” for "I Like Men,", and several CDN Smooth Jazz Awards. She has become well-established as an international artist, touring the world, and performing in Italian, French, Portuguese and English.

For reservations visit: http://www.vibratogrilljazz.com/reservations/index.php
or call: 310.474.9400
Posted by Arnaldo DeSouteiro at 4:43 AM