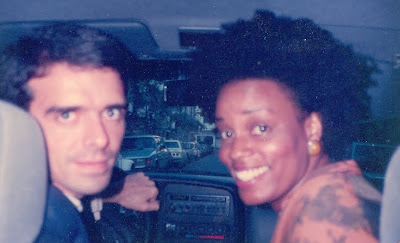 (Arnaldo DeSouteiro & Dianne Reeves)
The first concerts of the 32nd Montreal International Jazz Festival (June 25 - July 4, 2011) have been announced and tickets go on sale this Saturday, December 11th. The Montreal Fest is widely regarded as "one of the biggest and most expertly run musical events in the world," according to Ben Sisario of The New York Times.

See artists below. Lots more to come in the next months.
*********
The first concerts of the 32nd edition of the Festival: Angélique Kidjo, Dianne Reeves and Lizz Wright, Paco de Lucia, Milton Nascimento, Pink Martini, Madeleine Peyroux, Holly Cole, George Wein and the Newport All Stars featuring Randy Brecker, Anat Cohen, Lew Tabackin and Howard Alden, as well as the now-classic Battle of the Bands, with the Glenn Miller Orchestra and the Artie Shaw Orchestra
Christmas gifts for summer!
Tickets on sale Saturday, December 11 at noon
Exclusive pre-sale for Infolettre Spectra subscribers starts today!
********
Press-release:
Finally: here's the first batch of concerts in the forthcoming 32nd edition of the Festival International de Jazz de Montréal presented by TD in collaboration with Rio Tinto Alcan! So forget the tacky ties and other dodgy seasonal gifts-try out these magnificent holiday favours, whether for family, loved ones, friendsŠ or even yourself! Fans of jazz, folk, sultry rhythms or vintage swing: everyone will find something great to go under the tree with this exciting foretaste of the next edition of the world's biggest and best celebration of jazz, which will be held from June 25 to July 4, 2011. Tickets for these concerts go on sale this Saturday, December 11 at noon.

Sing the Truth! Angélique Kidjo, Dianne Reeves and Lizz Wright continue the legacies of Miriam Makeba, Abbey Lincoln and Odetta - June 25, 6 p.m., Théâtre Maisonneuve, PdA - It's a fantastic assemblage of major women of the stage, in a massive Montreal premiere. Raising high the torch inherited from firebrand singers Miriam Makeba, Abbey Lincoln and Odetta, this trio of superb vocalists intends to loudly proclaim their support for the civil rights cause. The program will certainly feature originals, but also melodies descended from the jazz, folk and blues legacy that inspired Dylan, Springsteen and Joplin, bequeathed by three recently-departed grandes dames, as well as flourishes of Billie Holiday, Marvin Gaye andŠ Erykah Badu! Around these three women who unite art and a great cause, are five musicians, including magnificently versatile pianist Geri Allen and drummer Terri Lyne Carrington. It's going to be a wonderful, memorable evening!

Paco de Lucia - June 25, 7 p.m., Salle Wilfrid-Pelletier, PdA - Aside from his highly-praised performances in the Jazz All-Year Round series, it's been 10 years since we enjoyed a summer concert by this artist we absolutely adore. And so we're celebrating his return, and not just any old way: Paco de Lucia, flamenco guitar virtuoso ("the greatest in the world, period," according to Pat Metheny) lands at the Festival to deliver a majestic opening concert featuring four other musicians, a dancer and two singers. A gem, in the magnificent setting of Salle Wilfrid-Pelletier.

Milton Nascimento - June 25, 9:30 p.m., Théâtre Maisonneuve, PdA - Undeniably one of Brazil's greatest stars, Milton Nascimento is the man whose transformative early work fusing Africanized jazz with Latino-American folk allowed an entire generation of artists to free themselves from the bossa nova. We haven't hosted him at the Festival for over 15 years, and needless to say, we've really missed him! An excellent guitarist, a singer with an astonishing tonal range, and a prolific composer, he is also one of those performers whose concerts remain forever etched in the memory. A major-and rare!-opportunity.

Battle of the Bands with the Glenn Miller Orchestra and the Artie Shaw Orchestra - June 26, 2 p.m., Salle Wilfrid-Pelletier, PdA - Flashback. Late '30s. Two Big Bands. On one side, the Glenn Miller Orchestra (winners two years ago), on the other, the Artie Shaw Orchestra (the faves of the 2010 edition). They'll battle it out for the honour of their incredible respective repertoires-no holds barred! And if some liberties are taken, if one orchestra poaches a signature tune or two-or even a musician!-from the other, it only adds to the fun! It's a concept so unique that it's now been exported to western Canada and the U.S.! This 4th annual classic American Big Band throwdown features two legendary orchestras, on the same stage, at the same time, here to swing Festival fans the way they did in the famed New York ballrooms of their renowned heyday.

George Wein's 85th Birthday Celebration with the Newport All Stars: Randy Brecker, Anat Cohen, Lew Tabackin, Howard Alden, Lewis Nash and Peter Washington - June 26, 7 p.m., Gesù - Centre de créativité - The "father" of all jazz festivals-he created the Newport Jazz Festival in 1954-Wein was here with us for our 30th anniversary. We're returning the favour by welcoming him back to celebrate his 85th birthday! As youthful as ever, producer, promoter and pianist George Wein still visits the four corners of the globe with the cream of the jazz scene. This time out, the octogenarian pianist not only brings in Howard Alden (guitar), Lew Tabackin (tenor sax), Peter Washington (bass) and Lewis Nash (drums), who visited us in 2009, but trumpeter Randy Brecker and clarinetist-saxophonist Anat Cohen, the young sensation of the moment.

Pink Martini - June 28, 7 p.m., Salle Wilfrid-Pelletier, PdA - It was absolutely meant to be, it was written in the stars: their 2009 concert, with full orchestra, sold out in record time! Right now, Thomas Lauderdale and China Forbes have just launched Joy to the World, an absolutely brilliant Christmas album, but they'll be in full Martini mode next summer, hitting the Fest with their 12 musicians, ready as ever to shake it and stir it up! And when these cats get to mixing their cocktail of jazz, swing, lounge, Latino and classical and pouring it out in English, Spanish, French, Italian and occasionally even in Arabic and modern Greek, the festivities could very well last all year!

Madeleine Peyroux - June 29, 6 p.m., Théâtre Maisonneuve, PdA - In 2009, she made her tour de force return to the Festival with Bare Bones, an album we'd been eagerly awaiting; this year, we're no less excited to welcome her back to Théâtre Maisonneuve! Steeped in folk, jazz and country, the silky-voiced singer (often compared to Billie Holiday) keeps us wanting more: with her versions of songs by Dylan, Baker, Cohen, Mitchell and Waits, but also-and above all-with her utterly remarkable originals.

Holly Cole - June 30, 6 p.m., Théâtre Maisonneuve, PdA - She first appeared on a Festival stage with her Holly Cole TrioŠ 25 years ago! The talented singer from Nova Scotia has been back about ten times sinceŠ but this latest four-year absence has been far too long for our liking! Voila-here she comes, with a new album, due in 2011. Expect her whispering contralto to transform yet more jazz and pop gems, confirming her undeniable interpretive talents.

Sade - June 30, 7:30, Bell Centre - Anglo-Nigerian songstress Sade is set to make her first ever Festival International de Jazz de Montréal appearance at Bell Centre. The artist, who rose to prominence in 1984 with her album Diamond Life, announced her big comeback to the world's music scene earlier this year. She will delight us with choice cuts from her varied smooth pop, jazz, and soul repertoire, and play songs from her latest release, Soldier of Love. The album climbed to the top of the charts and garnered favourable reviews from Rolling Stone, Billboard, and Entertainment Weekly. The concert is presented in collaboration with Live Nation and evenko.

And enjoy these new concerts in the Jazz All-Year Round series presented by TD:
Shad - April 1, 8 p.m., L'Astral - We were so floored by his performance last year that we were left with one wish: to bring him back as quickly as possible! Small wonder, since Shad is one of the best and most exciting rappers in Canada (born in Kenya, to Rwandan parents), whose 2nd album was called nothing less than "one of the greatest Canadian hip hop albums of all time." In 2010, he returned with TSOL, his 3rd-and perhaps even better-album, featuring appearances by Brendan Canning and Lisa Lobsinger of Toronto's Broken Social Scene.

Buddy Guy - April 7, 8 p.m., Métropolis - Yes, he was instrumental in fashioning the Chicago West Side sound. Yes, he has given the music a constellation of albums (including his latest, Living Proof, released in 2010). Yes, he's collaborated with more musicians than there are stars in the sky. Yes, he was inducted into the Rock and Roll Hall of Fame. And no, we can't count the awards and honours he's received over the course of 50+ years of slingin' that Strat. Beyond all that, when we think of Buddy Guy, we think of that unmistakable voice, supercharged guitar, and passionate, unforgettable performancesŠ we think of the blues. The legendary, immortal blues. Quebec blues guitarist Steve Rowe and his trio open the show.

Tickets go on sale Saturday, December 11 at noon
Tickets for these concerts go on sale Saturday, December 11 at noon and will be available from the Festival's central box office, located in Métropolis (59 Ste. Catherine St. E.), or from Admission (admission.com, 514 790-1245 or 1 800 361-4595), excluding those concerts presented at Place des Arts, which will be available at 514 842 2112, at 1 866 842 2112 or at laplacedesarts.com.
To get the jump on the crowd, sign up for the Spectra Newsletter and have the scoop on the Festival International de Jazz de Montréal emailed to your inbox. For further information, call the Bell Info-Jazz Line at 514 871 1881, toll-free at 1 85JAZZFEST, or visit montrealjazzfest.com
Posted by Arnaldo DeSouteiro at 6:54 AM