DVD of the Day - "Happy Mondays: Call The Cops" 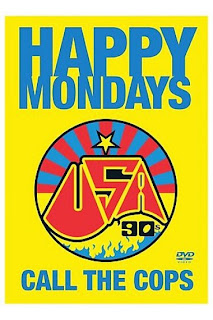 This DVD captures the English pop/house band on their first American tour in 1990 in support of their "Pills 'n' Thrills And Bellyaches" album. It combines performance footage from The Sound Factory in New York (captured by the famous remote truck of The Record Plant) with behind the scenes material to give a really intimate portrait of the band. There are also cameo appearance from Keith Allen and the late Tony Wilson, founder of Factory Records.

Happy Mondays were, along with the Stone Roses, the defining band of the Manchester scene in the late 80s and early 90s. Their music combined rock and house elements in a unique fusion which, coupled with Shaun Ryder's biting lyrics, became the soundtrack of the era. The original line-up was Ryder on lead vocals, his brother Paul Ryder on bass, lead guitarist Mark Day (aka "Moose" or "Cowhead"), keyboardist Paul Davis (aka P.D), and drummer Gary Whelan. Bez would later join the band onstage during a live performance after befriending Shaun Ryder (known to him as "X") and served as a dancer/percussionist. Rowetta joined the band to provide backing vocals in the early 1990s. The tracklist includes such songs as "Step On," "Clap Your Hands," "Kinky Afro," "Lazyitis," "Rave On," "Do It Better" and "Wrote For Luck", many of them featuring guest vocalist Rowetta Satchell.
Posted by Arnaldo DeSouteiro at 6:00 AM