DVD of the Day - "Santana plays Blues at Montreux" 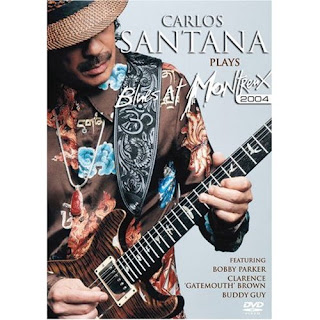 DVD of the Day
Carlos Santana: "Plays Blues at Montreux 2004" (EagleVision/ST2) 2008
On a magical night in Montreux in 2004, Carlos Santana invited three of his favourite bluesmen: Buddy Guy, Clarence "Gatemouth" Brown and Bobby Parker for a concert of outstanding blues music. Each artist performed a full length concert and was joined on stage by Carlos Santana and other guests including Nile Rodgers and Barbara Morrison. Eagle Vision had previously released, in 2007, a 3-DVD set of the whole night, but now they present a single disc version which features all the Carlos Santana performances from the event, ie, only the tracks on which Carlos - one of my guitar heroes - really appears.
Id est: four tracks with Clarence "Gatemouth" Brown ("I've Got My Mojo Working", "Drifter", "Grape Jelly", "Okie Dokie Stomp"), three with Bobby Parker and the jam-sessions with Buddy Guy. The result: over 90 minutes of great blues music.
Posted by Arnaldo DeSouteiro at 1:24 PM