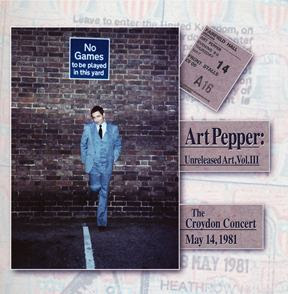 At Fairfield Hall, Croydon, England, in May of 1981, Art Pepper appeared with the quartet that had returned him to music. Together, they delivered to loyal and savvy British fans a dazzling performance of originals and bebop classics.

Volume III: The Croydon Concert is the first release by Laurie Pepper's Widow's Taste Records featuring the rhythm section that made up the Art Pepper Quartet from 1978 through most of 1981. They were indispensable to the alto saxophonist's triumphant return to the scene at the end of his life and functioned as both engine and anchor during much of that time. John S. Wilson praised them in the New York Times, saying they made Art's "innate rhythmic drive even more buoyant" and referring to Bob Magnusson as "fabulously fast-fingered." Critic Gary Giddins, in The Village Voice, said Bob's "sure time and rich tone in the bottom register complemented Pepper's frequently ethereal gambits" and praised Carl Burnett's "chatty responsiveness." Musician and critic Jon Hendricks called Milcho Leviev "a most marvelous pianist, a real joy. He plays with beauty and passion."

After his last long imprisonment in San Quentin during the 1960s, Art found reentry into music almost impossible. Thin-skinned to begin with, he became increasingly paranoid, hesitant to even try to work with some of the musicians he admired most. But this band of profoundly gifted jazzmen made him feel safe. These were not "safe" players, but instead challenged and provoked him to continue to develop his gifts and evolve as an artist. 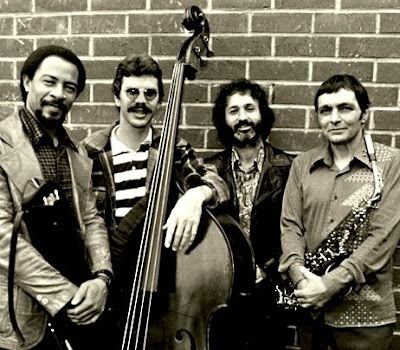 
The Croydon recording was sent last year to Laurie Pepper, Art's widow, by a European fan who believed this particular music was too good to languish in the archives of collectors. Laurie agreed with him so thoroughly that she changed all her plans. She decided to make this concert the third in her label's critically acclaimed series of previously unreleased Art Pepper performances.

Reviewers have responded enthusiastically to the two previous releases. Volume I from this series, another two-disc set, is The Abashiri Concert, recorded in Japan in 1981. Volume II is The Last Concert, recorded at the Kennedy Center in Washington, DC in 1982, documenting Art's last performance just weeks before his death:
"Jazz in the era of the heroic statement. Excellent." --Ben Ratliff, New York Times
"Pepper blowing blues and ballads with a shivering intensity, as if each song recounted his own dreams and disappointments." --Fred Kaplan, New York Times
"All but unprecedented. Both soul-searing and sentimental." --Will Friedwald, New York Sun
********
Jazz Station review:
"The Croydon Concert" is destined to the same acclaim. What a quartet! All musicians in peak form, including Pepper. The sound quality is pretty good for a "bootleg" tape, improved by the excellent mastering work of engineer Wayne Peet. Laurie Pepper's liner notes are luminous as usual, providing behind the scenes revelations that are always attractive for jazz historians. Besides, she writes with fluency and verve, sounding like an old friend sharing intimate secrets with us.
Art Pepper... well, the incomparable alto-master plays with grace, melodic sophistication and passion. The group interaction is fantastic. Bob Magnusson's fat and silky bass tone is a pleasure to listen to. This must be drummer Carl Burnett's best performance ever documented on record. And the Bulgarian genius Milcho Leviev is in splendid form at the piano, proving to be the perfect sideman and the ideal soloist to Pepper (he was not "possessed" that night, thanks God!)
The program includes nine extended tracks - some of them rounding 20 minutes. But you'll never feel tired or bored. Time flies! My personal favorites are "Ophelia", "Patricia", the haunting Gordon Jenkins' ballad "Goodbye", a latin-tinged version of Franz Lehar's "Yours is My Heart Alone", "Dedication" and the tour-de-force "Make A List" (Make A Wish). According to Laurie's notes, "Dedicated" was "a total surprise, he had never played it before and never did again," she writes. "It's a minor blues, a quasi-Coltrane tune". The document of such a marvelous night already belongs to the list of the best "special releases" of the year. It's the kind of CD that deserves a 5,000 star-rating.
********
The Widow Knows

The aims of Widow's Taste are to introduce truly unreleased and unheard music by Art Pepper to people who love him and want to hear him -- and to introduce him to people who have had only a limited experience with jazz and have never even imagined his unique brand of soul, swing, and loveliness.

In line with the second aim, and before the end of the year, Laurie plans to release a music video culled from her ongoing work-in-progress movie project, Straight Life: The Stories of Art Pepper. The project is based on the Peppers' book, Straight Life (Perseus Books). The video is a re-creation of the legendary Art Pepper Meets the Rhythm Section recording session, a beguiling combination of live action and animation. (Chapters of the movie can be seen at http://rs6.net/tn.jsp?e=001pNM0PWeen74ltR0PiAGAU9FYOZNX2e4geNc8HmknqSHWXMwkQkugSi4sG52r78x3JqZBqKQeEDL0bzAM85CVZBt4JuRcjqx1y415vycxiaMurPKWqcbWRw==.)
Next year, Widow's Taste will release a 3-disc set, The Art History Project. Disc 1 will be Early Art with Kenton, Shorty Rogers, and at the Lighthouse. Disc 2 is The Middle Period: Never-heard, over-the-top, outside but wildly swinging stuff recorded at Contemporary in 1962 and '67 but never released. That was the stubborn breakthrough that made it possible for Art to play the way he did at the Village Vanguard in 1977. Disc 3 will be Reconciliation: The best of Art in his "post-Vanguard" period.

Laurie Pepper has said that Volume III: The Croydon Concert will give the world a chance to hear Art and his "comeback band" at their tightest, at the top of their form playing Art's music exactly as he wished it to be heard. And the really overwhelming response of fans and critics to Volumes I and II has increased her commitment to keeping Art's music alive by continuing to release the best of Art Pepper's unheard performances. 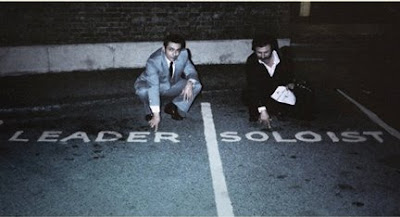