CDs of the Day - "Amanda Carr" 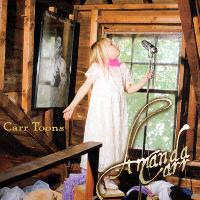 
“ Amanda Carr, a true jazz singer in a time of wannabes. . . she sings and swings with the unaffected confidence of a genuine jazz improviser. Unlike some of the present alleged jazz vocalists, Ms. Carr does not try to imitate a horn. She is an authentic musician in the front line with her longtime colleagues on "Soon" . . .” NAT HENTOFF, from the Wall Street Journal article, 9/5/07.


Well, I took notice to Amanda Carr's career after that story written by Nat Hentoff (a heavyweight jazz historian) a propos of Carr's latest release, "Soon". If Nat praises a singer so much, she must be good! For my surprise, the lady was excellent! Since I've listened to her first track ever, I instantly became a fan.

Now, all her albums are not "stocked" in my collection of 30,000-plus CD titles. They're always at hand since I've been returning to them many times since they provide me with multiple listening pleasures. Every time I am back home after a long trip, and I need to savour "great delightful music", I go back to a special place in my listening place, where people like Bill Evans and Milt Jackson are always top choices. Amanda's albums have been added to that special list since almost a year ago.

I should thank her (and Nat!) for giving so much pleasure to my soul and ears. It’s a really a joy to listen to her albums.

“Carr Toons”, her debut date, is de-lovely! In all aspects: from the front cover photo (congrats to Ms. Moccia!) to the beautiful back cover photo. From the album title to the graphic design. First-class repertoire, excellent musicians and, back to the clichezized word, “lovely” arrangements, lovely interpretations, lovely and very instructive liner notes.

It’s such an excellent album that it’s hard to believe that it Mrs. Carr's very first CD…and originally conceived as a demo!

(btw, the sound quality is superior to “Soon”, specially the sound of the drums, specially concerning the use of brushes, but it’s another matter).

The opening track , It Ain't The Meat It's The Motion, was a novelty to me, I had never heard that “lovely” song before. Legrand’s “Watch What Happens” is an old favorite of mine, a song I learned to love through Tony Bennett. Btw, 2 years ago, when Tony performed in Rio, he once again opened the show with “WWH”, like he often does.

Then, after the piano solo, Amanda sounds really “superb” when re-constructing the melody through a fantastic phrasing. I’ll not go into details, but all the intervals and inflections are outstanding. And, the most important thing: they sound natural, very spontaneous, and it’s much better than when you listen to someone who seems to have studied and rehearsed those phrasings many times before the recording. The same applies to the wordless vocals during the tag.

Amanda deeply touched my heart with “We’ll Be Together Again”, another longtime favorite. That one I learned to love thanks to Mark Murphy. Carr's rendition is luminous, including a sense of true hope that misses in most recordings of that haunting ballad. Her version is haunting but luminous hopeful, like it must be if the singer understands the lyrics meaning (most don’t do in the current scene…) The muted trumpet solo by Herb Pomeroy is a very special “plus”, and I also enjoy Carr's flights to the lower registers. Her expressiveness is amazing.

“Maybe”! Congrats, Mrs. Songwriter! It’s a…lovely bossa, propelled by a delicious beat.
The string section sometimes sounds like a string quartet, in other tunes as an octet, but on “Maybe” it looks like a larger section, or a small real section augmented by a synthesizer.

Shearing’s “Lullaby of Birdland” evokes memories of my childhood. My father had many 10-inch LPs of the Shearing quintet, and I got some of them (like “Martini Time”) on CD. I was fortunate also to see George Shearing performing that song alive, when I attended a concert he gave in Rio de Janeiro (at "Sala Cecilia Meirelles") back in 77 or 78, backed only by Brian Torff’s bass. It’s a never tiring song, at least for my taste, although I have heard hundreds of recordings. Oh, I loved Amanda's scat and the way she calms down things after Pomeroy’s solo, singing in a lower volume. Simple lines but very effective, never affected.

“Scotch and Soda”. Very charming song, specially sung by you. My favorite recording, till then, was the one by Manhattan Transfer. The way the pianist ingeniously quotes “Tea for Two” during Carr's solo is another plus.

The lyrics refer to “dry martini” and I can’t listen to “Mean To Me” without remembering of Paul Desmond’s dry-martini sax sound when he recorded that song on the “Pure Desmond” album. Amanda keeps a similarly seductive mid-tempo groove. And that’s a big compliment. Once again her scat sounds lovely (see how many times I need to use this recurrent word?)

Beautiful string arrangement on “Someone to Watch Over Me” and “Just another spring.” What a great idea to use the voice of Amanda's mother’s as a child intro to the last song. The effect is stunning.

Now I need to re-listen to the other albums. But I’m sure I’ll be returning often to “Carr Toons”.

Voted by this blog as one of the "best jazz vocal albums" released in 2007. I've also included Amanda among the top 3 female singers of the year.

I've been listening a lot to "Soon" - specially to "If You Could See Me Now", "Flamingo" and "Inutil Paisagem". Always late at night, savoring a good red wine. They really put me in a great mood! There's also a take on Jorge Ben's "Mas Que Nada".

Not to mention "Where Can I Go Without You".
Amanda herself told me the story behind it:
"Where Can I Go Without You" was written by Peggy Lee (and Victor Young, who I believe committed suicide in Los Angeles later in life). It's a beauitful song that brings tears to a lot of eyes, including mine when I sing it. I was on-air the other night on WGBH (great NPR station with state-of-the-art new studios) and me and my group did an hour, including that song. My voice always quivers with emotion at the end," she reveals.


Amanda Carr: "Tender Trap" (Original Music Service) 2004
Featuring: John Wilkins, Bronek Suchanek, Kenny Hadley, Dick Johnson, Rick Hammett, Jerry Vejmola
My personal favorite tracks are "I'll Close My Eyes", "What We Were Asking For", "I'll Never Be The Same", "Old Devil Moon", "What Am I Here For" and "No More Blues" (Jon Hendricks' controversial English lyrics to Jobim's "Chega de Saudade")
In a 4-star rave review of "Tender Trap", renowned jazz critic Ken Deyden wrote:
“With so many female vocalists releasing new jazz CDs in a given year, it is extremely difficult to grab one's attention; Amanda Carr's CD, though released by a small label, has the ingredients necessary to do so......Amanda Carr deserves greater attention in the jazz world." 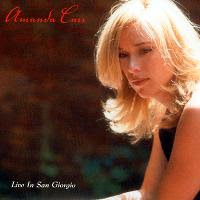 Amanda Carr: "Live in San Giorgio" (Original Music Service) 2000
Featuring: Luigi Martinale, Nicola Muresu, Paolo Franciscone
A soulful collection of jazz standards and originals performed live in the foothills of the Italian Alps. Accompanied by the Martinale Trio, Amanda captures the essence of this romantic region in top-class performances of such gems as "Old Devil Moon", "The Nearness of You", "They Can't Take That Away From Me" and "Save Your Love For Me".
Amanda herself talks about the CD:
"So where is San Giorgio, Italy? S.G. is a quaint 11th century village just a few miles south of the Italian Alps where the 2,300 local residents peacefully make their living or commute to the larger surrounding cities of Turin, Ivrea or Milan. In 1998, I was performing in Ivrea for the Eurojazz Festival which included appearances in peripheral cities and towns. A good friend of mine, who lives in San Giorgio, proudly showed me around this village and I stayed a few nights with his family... I fell in love with the place: the ancient winding streets, the central square framed by its historic church and the people who were so accommodating and interested in me and my music. After viewing the Teatro Comunale (Central Theater), we decided it would certainly be worth doing a concert there. I contacted Luigi Martinale in Turin and the rest of the trio who agreed to perform in March of 99 when I returned to Italy. The theater acoustics rendered a good opportunity for a live recording and thus, the birth of the CD. The material I chose is a combination of original compositions and American standards that I thought would gracefully cross the language barrier. Limited time with the players and a feeble grasp of Italian was a challenge that created a naturally dynamic environment and , ultimately, an exciting recording. The generous instrumental and solo sections, to me, make for good listening. Live in San Giorgio is the result of four of us whimsically getting together and, transcending mere words, coming up with something delightfully memorable."
All CDs are available through www.cdbaby.com
Posted by Arnaldo DeSouteiro at 1:23 PM