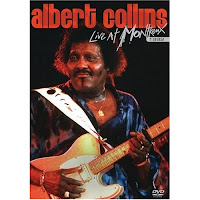 DVD of the Day
Albert Collins: "Live at Montreux 1992" (EagleVision/ST2) 2008
Filmed just a year before his untimely death from cancer, this 1992 concert from Montreux finds the great Albert Collins still in fine form. With his trademark Fender Telecaster and distinctive finger picking style well to the fore "The Iceman" delivers a set that runs from his early million selling single "Frosty" right up to songs from his final studio album "Iceman".
As an added bonus there are four lengthy tracks from Albert Collins' 1979 appearance at Montreux.
Posted by Arnaldo DeSouteiro at 5:05 PM