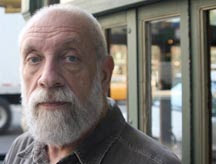 The celebrated Grammy-winning record producer Joel Dorn died on December 17th in New York of a heart attack. He was 65 years old. Dorn had worked for Atlantic Records (as a protegé of the brothers Ahmet & Nesuhi Ertegun) between 1967 and 1974 producing acclaimed jazz albums by musicians such as Hubert Laws, Gary Burton, Keith Jarrett, Herbie Mann, Max Roach, Les McCann, Mose Allison, Ron Carter, Joe Zawinul, Eddie Harris, Joe Chambers, Woody Shaw, Sonny Stitt, Yusef Lateef and Rahsaan Roland Kirk.
He also produced best-selling records by Bette Middler and Roberta Flack, including the million-selling "Killing Me Softly". Later on, he formed his own production company The Masked Announcer, founded the Night Records, Label M, 32Jazz and Hyena labels, and supervised reissues of classic jazz albums for Columbia, Rhino and Universal. In the early 2000s, Dorn was hired by N-Coded A&R man, Carl Griffin, to "prepare a new singer": Jane Monheit. Then, he produced her first three controversial albums: "Never Never Land," "Come Dream With Me," and "In The Sun". Something similar to Arif Mardin's signing to produce Norah Jones' debut album for EMI/Blue Note, at Bruce Lundvall's request to give it some "respectability". Obituaries: Washington Post, New York Times, Los Angeles Times, Washington Post.
One of the world's top ten producers ever, Joel Dorn worked in the early 70s with the Brazilian musicians Eumir Deodato and Dom Um Romão, hiring them for some important projects he produced.
Dorn and Deodato collaborated on albums by Ray Bryant, Donal Leace and, most notbaly, Roberta Flack. Dorn introduced Deodato to Mrs. Flack and got her approval to have the Rio-born arranger scoring songs on Roberta's second solo album, "Chapter Two" (1970), for which Deodato added the additional strings & horns orchestrations to the rhythm arrangemnets created by Donny Hatthaway. For her follow-up project produced by Dorn, Deodato contributed only to one track, "Bridge Over Troubled Water", writing the scores for a cello section & background voices.
Then came the multi-platinum selling album "Killing Me Softly", the biggest hit for both Roberta and Joel ever! All tracks were produced by Joel Dorn and arranged by Roberta Flack herself, who also played acoustic & electric pianos in the eight songs. The LP reached # 3 in the Billboard "Pop" chart and # 2 in the "Black" chart of the same magazine, while the opening tune, "Killing Me Softly With His Song" became a Number One hit in the Billboard "Pop Singles" chart in the historic week of March 31, 1973 (Curiously, the # 2 single on the chart at that same week was Deodato's "Also Sprach Zarathustra/2001").
It's also worth to mention that the single (not the album) won three Grammy awards for "record of the year" (credited to both Roberta and Dorn), "song of the year" (to the composers Norman Gimbel & Charles Fox), and "best female pop vocal performance". Roberta also had received a nomination as "best arranger", having recorded the track backed only by a small group consisting of Ron Carter, Idris Muhammad, Eric Gale and Ralph MacDonald, with no orchestra. "Killing Me Softly" was, actually, the last song added to the album, included in the repertoire in the very last minute, because Dorn felt there was no potential radio hit among the other tracks already recorded (on another studio, the Regent Sound, by another engineer) for the album. "The other songs were great, but we needed a hit, so I convinced Roberta to give a chance to the song that Gimbel had sent me. I did a urgent request to Nesuhi for a couple of studio hours at Atlantic's own studio in NY and everything worked perfectly. It was a first-take hit, with no need of a string overdub," Joel once told me. "We mixed the track in three works, pressed some promo singles and shipped them to the radios. The rest is history."
The other songs in the "Killing Me Softly" album included two tracks (Janis Ian's "Jesse" and Leonard Cohen's "Suzanne") for which Dorn had asked Eumir Deodato to overdub subtle strings arrangements. Joel also invited other arrangers such as Don Sebesky (lovely strings & horns added to "Conversation Love"), Alfred "Pee Wee" Ellis (famous for his work with James Brown and Esther Philips), Kermit Moore (a cello virtuoso), and William Eaton, who scored "River" and the Ralph MacDonald-penned "When You Smile", to which he added a delighful brass section.
Dom Um Romão's always was Joel Dorn's favorite percussionist. His services were often requested, but most of the time Dom Um was unavailable, on the road, touring with Weather Report. After leaving the fusion supergroup, Romão resumed his studio activities and contributed to such Dorn-produced albums as David Newman's "Mr. Fathead" and Yusef Lateef's "The Doctor Is In...And Out", both from 1976. The following year they reunited once again on Harold Vick's "After The Dance" and Dory Previn's masterpiece "We're Children of Coincidence and Harpo Marx", recently reissued on CD. It was also Dorn who produced, back in 1999, for his independent label 32Jazz, the CD compilation "Dom Um Romão: The Complete Muse Recordings," which brought together the two albums that Romão recorded for Joe Field's Muse label in 1973.
Posted by Arnaldo DeSouteiro at 9:45 AM