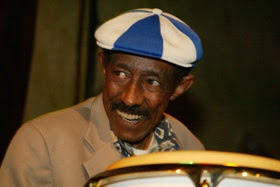 Remembering Carlos "Patato" Valdes
(b: November 4, 1926 - d: December 4, 2007}
by Charles Carlini
New York, NY - The world lost one of Cuba's most significant keepers of the Afro-Cuban flame this week. Carlos Valdés, known to the world as Patato (a reference to his diminutive size), died from complications of Emphysema Tuesday night in Cleveland, Ohio. He was 81.
Although he may have resembled a leprechaun, Patato was an enormous figure in the world of Afro-cuban drumming. He, along with Mongo Santamaria, Armando Peraza, Francisco Aguabella and Candido Camero, collectively codified their language of rhythm for mainstream American audiences upon their arrival to this country.
He was one of the very first congueros to tap melodies from his congas. In fact, he often took his time tuning his congas before each performance (and sometimes during) as the drums needed to ring the precise tones to achieve their melodic statements. And since it was very hard to keep his congas in tune, he later invented a ring which attached itself around the skin of the drum which he could tighten with a key thereby keeping it in tune.
I had many wonderful memories working with Patato over the years. I practically grew up watching him perform. And when I settled in New York, I was honored with the privilege of working with him on numerous occasions. Whenever I was producing a Latin Jazz show, I was sure to call on Patato to be among the leading players as he was such a showman. In fact, many of the club owners and festivals demanded that he be apart of the show I was packaging. And rightfully so. He knew how to work a crowd. And people just loved him.
I can remember celebrating one New Year's eve in Florida with Patato who was then 64 years old. We were on Hibiscus Island at someone's palatial mansion. How we got there was another story. But we were the evening entertainment. I played guitar with my half-brother Richard Puente (son of Tito) on bass and a few other local musicians. And, of course, Patato on congas. Patato was a hit. He sang, danced, smacked the drums like no one's business. And when it was all done, he ate half the food at the party.
On another occasion, Patato had sold me a set of his LP model congas which I made him sign. But I also asked him to give me lessons as a condition of purchasing them. He agreed. So on the following week, I had a car pick him up and drive him to my place. But before we could begin the lesson, he needed a six-pack of Heineken to loosen up. So there we were in my apartment in mid-town Manhattan banging away on congas for several hours, drinking beer and annoying the heck out of my neighbors. When I failed to execute one of his many licks well, he would rap me on my hands with a clave stick (boy did that hurt) and show me the correct way after yelling at me. I'll never forget that lesson.
One year I organized a birthday tribute to Patato at New York's Birdland and the list of well-wishers was enormous. Fellow Conga Master Ray Barretto was one who was in attendance. And after he played a burning chart, he stood up towering over his Conga drums and said to the crowd that "Patato is to me the single most creative and musical percussionist I have ever had the honor of knowing."
There will never ever be another like him. That's the God's honest truth.
Long live Patato!
Posted by Arnaldo DeSouteiro at 8:39 AM