"Rollins In Holland," a previously unreleased 3-LP and 2-CD set, comes out soon on Resonance 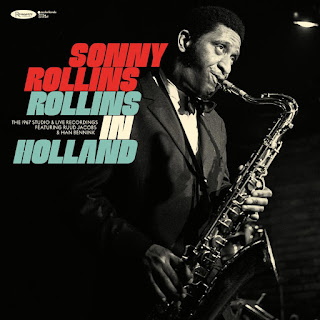 Resonance co-president Zev Feldman, known within the industry as “the Jazz Detective,” says of the forthcoming release, “The music on Rollins in Holland is extraordinary. Rollins fans will rejoice when they hear the news of this discovery. These performances follow an important time in his life, and he brought those experiences along with him to make this incredible music.”

In a new interview with Feldman included in the set, the 89-year-old Rollins says, “I’m so happy that Resonance is putting it out because it really represents a take-no-prisoners type of music. That’s sort of what I was doing around that period of time; that was sort of Sonny Rollins then—a wham-bam-thank-you-ma’am approach. It was very much me. And I loved it and I loved playing with those guys.”

The music heard on the Resonance album is drawn from a little-documented period in Rollins’s career. The musician’s 1966 Impulse! album East Broadway Run Down was his final record date before a studio hiatus that lasted until 1972. In 1969, mirroring a celebrated public exit of a decade earlier, he began a two-year sabbatical from live performing. 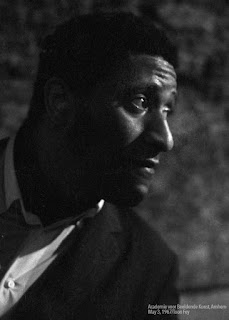 Rollins in Holland captures the then 36-year-old jazz titan in full flight, in total command of his horn at the height of his great improvisational powers. He is heard fronting a trio, the same demanding instrumental format that produced some of the early triumphs of his long career: the live A Night at the Village Vanguard (Blue Note, 1957) and the studio dates Way Out West (Contemporary, 1957) and Freedom Suite (Riverside, 1958).

During his brief but busy 1967 stay in the Netherlands, the saxophonist was supported by two of the nation’s top young players, bassist Ruud Jacobs and drummer Han Bennink. The pair had together supported such visiting American jazzmen as Johnny Griffin, Ben Webster, Wes Montgomery, and Clark Terry, among others. Jacobs was a celebrated straight-ahead accompanist, while Bennink had developed a reputation as an avant-garde lion, having backed Eric Dolphy on 1964’s Last Date. The pair jelled magnificently behind their celebrated leader.

Rollins in Holland brings together material drawn from three separate appearances by the trio: a freewheeling May 3 concert at the Arnhem Academy of Visual Arts, at which Rollins stretched out in expansive performances that sometimes topped the 20-minute mark; a four-song May 5 morning studio session at the VARA Studio in Hilversum, where Dolphy and Albert Ayler had also cut unforgettable dates; and two live shots captured during the band’s stand that evening on “Jazz met Jacobs,” a half-hour national NCRV TV show presented from the Go-Go Club in Loosdrecht and hosted by bassist Jacobs’s pianist brother Pim and his wife, singer Rita Reys.

In his essay for the collection, Dutch jazz journalist, producer, and researcher Frank Jochemsen notes that while recordings of the Arnhem show (presented here with carefully restored sound) had been passed hand-to-hand by Dutch jazz buffs over the years, the rest of the music was only recently unearthed.

In 2017, the four stereo tracks from VARA Studio were discovered by Jochemsen, and they were authenticated by Ruud Jacobs and Han Bennink as they were being digitized for the Dutch Jazz Archive (NJA). In 2019, Jochemsen also discovered the audio from the “Jazz met Jacobs” appearance in the Dutch Jazz Archive, along with a unique set of photos shot at the sound check and live broadcast of this lost TV show. 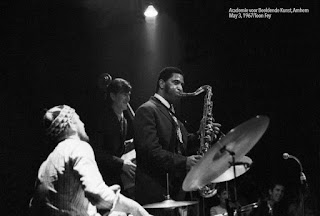 Jochemsen says, “I find it an exciting idea that so much has been recovered and documented from this modest tour and that the music is indeed of such high quality. Even more sensational is the fact that the whole world can listen to it now. The great Sonny Rollins at his best, accompanied by a great rhythm tandem, which makes me, as a Dutchman, extra proud.”

An extensive overview of Rollins’s Holland trek is supplied by jazz journalist Aidan Levy, whose biography of the saxophonist will be published by Da Capo Books. Levy says, “Rollins in Holland is a resounding, still-urgent argument for jazz as a universal art form, transcending time, place and race. This is jazz at its most international and interdependent, with no boundaries or borders.”

Rollins in Holland also includes an in-depth interview by Levy with Han Bennink and Ruud Jacobs, conducted a year before Jacobs’s death from cancer in July 2019. In it, the late bass virtuoso recalled the experience of playing with the American legend as “something spiritual. [There was] a very special atmosphere on the stage where I felt I could do anything.”

The opportunity to bring Rollins’s exceptional Netherlands performances to the public for the first time has proven a special moment for Resonance, Feldman says: “Working with Mr. Rollins has been the experience of a lifetime, and I’m so grateful that he has put his trust in Resonance and our team to bring forth this newly unearthed, previously undocumented chapter in his career.”