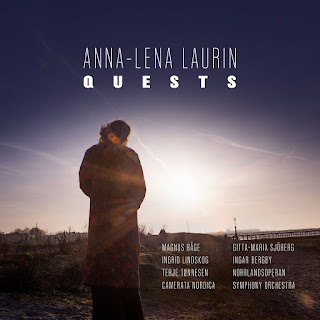 If you like Debussy's "Syrinx" and "Prelude To The Afternoon Of A Faun," you'll love the "Concerto For Flute, Strings and Harp." Laurin goes one step further. Call it "Nordic Impressionism," if you will.

"Quests" was originally composed as an opera monologue for soprano and piano and was written to the 200 years anniversary of Danish philosopher Søren Kierkegaard (1813-1855) in 2013. The duo piece was premiered by Gitta-Maria Sjöberg and pianist Linda Dahl Laursen with Margrethe II of Denmark in the audience and had lyrics by P. Golborne.

This expanded version, for soprano and symphony orchestra, was written with lyrics by AL Laurin herself, inspired by the philosopher’s thoughts, bringing up many existential questions. "Quests" is written with support from Musik i Syd.

With the kickoff in "Concerto For Flute, Strings and Harp" – commissioned by Camerata Nordica and Musik i Syd to celebrate the 100 years anniversary of Laurin’s home town Eslöv – Camerata Nordica started a long collaboration with premieres, commissioning, CD recordings and touring within Sweden as well as abroad, with Laurin.

Anna-Lena Laurin is a classical composer who have had commissions from/worked with orchestras and artists such as Royal Stockholm Philharmonic Orchestra, Norrlandsoperan's Symphony orchestra, Göran Söllscher, Håkan Hardenberger, Andrew Manze, Thomas Søndergaard, Anders Bergcrantz, Richie Beirach and Swedish Radio among many others.

Her music has been performed in USA, China, Hong Kong, Europe etc. Laurin is Composer in residence 2014-2016 by Camerata Nordica and in pipeline are three new concertos in collaboration with them and their leader Terje Tønnesen – for trumpet, guitar and violin. A long list of chamber music works are coming up for premieres arround the world. Many distinguished soloists ask for her music and she has commissions planned for a long time ahead.

Laurin started her musical career as a jazz pianist and vocalist and is still working in betweeen her classical commissions and the activities in the jazz field – touring with TV, radio and performances on different events and festivals.

She was appointed by Swedish Radio as Composer of the Year/Jazzkatten 2013 "for her ability to create a succesful crossover between the jazz’s and classical music’s language and the courage to write music from her heart without leeking at prevailing musical trends."

Two years later, for her orchestral work "The Painter" recorded by trumpet master Anders Bergcrantz, Laurin placed 2nd in the "Cmposer of the Year" category on Arnaldo DeSouteiro's 37th Annual Jazz Station Awards. Achieving such big apprieciation in two different genres makes Laurin very unique. But she directs most of her energy and focus on the symphonic musical universe.

Since I was the only one in my family who was into music," Laurin says, "it took me quite a long time to realize that I was good in composing and that this was the profession that suited me the very best. So even if my proffession was musican since the early twenties – I wrote my first orchestral work when I was 44 years old! Since then I’ve written many in a very short time – and I have had the fortune to work with really great, great orchestras and artists such as Royal Stockholm Philharmonic Orchestra, Andrew Manze, Helsingborg Symphony Orchestra, Thomas Søndergaard, Anders Bergcrantz, Norrlandsoperans Symphony Orchestra, Terje Tønnesen, Richie Beirach, Håkan Hardenberger, Francisca Skoogh, Linda Dahl Laursen, Martin Sturfält, Camerata Nordica, and Mats Rondin, among many others."
Posted by Arnaldo DeSouteiro at 8:20 PM