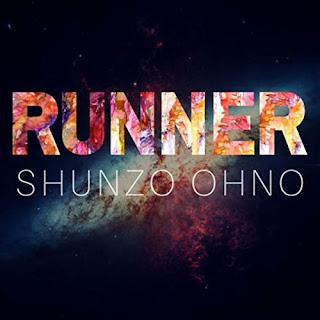 Adventurous and creative music of the highest level. One of the best releases of the year, "Runner" is comprised of three compositions; the first of which is a four piece symphonic suite aptly titled “Epic”.

Shunzo Ohno is one of the most versatile and influential trumpeters in modern jazz. Over the course of his lengthy career, Ohno has released 18 albums as a leader and appeared on over 30 as a sideman. His long list of collaborators include Art Blakey and the Jazz Messengers (with whom he toured in the early 1970’s), Wayne Shorter, Herbie Hancock, Larry Coryell, Machito and his Afro-Cuban Orchestra, and master arranger and composer Gil Evans, among many others.

On "Runner," Gil Evans’ influence is most apparent. Shunzo Ohno became a key collaborator with Evans and appeared on four recordings including the Grammy-Award winning album "Live At Sweet Basil."

His fascinating life, with his triumph over illness and adversity, is the subject of a biography, "Trumpet of Hope" and a documentary film, "Trumpet of Glory." Fuji Television featured his story on the primetime show "Unbelievable." The documentary short, Never Defeated: The Shunzo Ohno Story, narrated by long-time friend, Buster Williams.

Born in Gifu, Japan, Shunzo began his musical passion at age 13 in his local public school. By age 19, Shunzo was the leading jazz trumpeter in Japan. Working as a composer and arranger, Shunzo's career hit high gear when he met  renowned bandleader Art Blakey. He toured with Art Blakey's Jazz Messengers, throughout the United States and settled in New York City in 1974 at Blakey's suggestion.

The compelling Latin energy in Shunzo's playing can be traced back to his tenure with the celebrated Machito and his Afro-Cuban Orchestra. He recorded the Grammy Award-winning album with Machito and His Salsa Big Band (1983), which feature his solos.

Shunzo then joined one of his most influential inspirations, master arranger and composer Gil Evans, becoming a key contributor on tours, club dates, and recordings, including the 1988 Grammy Award-winning "Live at Sweet Basil." Shunzo made a total of four recordings with Evans, who remained a lifelong mentor to him. Returning to Japan with Super Sounds, a group that included jazz legends Herbie Hancock, Wayne Shorter and Larry Coryell broadened his experience.

In 1988, he was involved in a serious automobile accident in which his teeth and lips were permanently damaged. He remained undeterred by the long recovery process, and strengthened his resolve to find a new approach to his music. He renewed his vision in performances with Wayne Shorter and later, Buster Williams.

Adversity struck Shunzo again in 1996 when he was diagnosed with life-threatening throat cancer. For three years, he underwent radical treatments to control the disease and embarked on the difficult road to recovery. His refusal to allow personal struggles and seemingly insurmountable circumstances led Shunzo to create new developments in his art and unique voice.

Shunzo wrote and performed for the award winning documentary film for the Children's Rights organization titled "TreShawn." The Min On Concert Association, founded by Daisaku Ikeda, promotes the global exchange of musical culture and has awarded Shunzo the "Min On Award of Highest Honor" which reads in part:

Mr. Ohno, You have never given in to adversity, your inner conviction unassailable. Your love for the trumpet and the exquisite music it creates is unsurpassed, its message of hope and triumph radiating from the world of jazz in New York out towards the entire world, instilling listeners everywhere the strength to live.”

When the Great Tohoku Earthquake struck Northern Japan, Shunzo Ohno has dedicated his endeavors to the rebuilding efforts, focusing on reviving music programs, providing instruments and instruction.
Posted by Arnaldo DeSouteiro at 8:20 PM