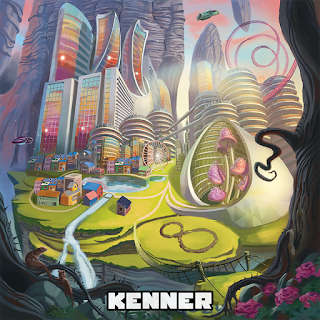 The album also features two guest masters: Jamey Haddad on percussion (Paul Simon, Yo Yo Ma, Herbie Hancock), and Tamer Pinarbasi on qanun (New York Gypsy All-stars).  This unapologetically playful album integrates the soulful and the calculated, with elements of R&B and jazz coming in contact with Kenner’s classical and progressive rock influences. This album combines the grittiness of the real world- the day to day struggle, with the boundlessness of imagination.

Kenner’s compositions seem to transport the listener to another plane, which is fitting for what is first and foremost a concept album with the aim of doing just that. Kenner writes that "8Ball City" is a “fictional city located in the human psyche. The city itself represents the coexistence of thoughts, emotions and ideas, intermingling in a secluded place between the mountains. The album invites the listener to explore the bridge between the real world and the world of the mind, where anything and everything is possible.”

The composer extends his invitation with music that conjures imagery of utopia, futurism and old forgotten lands. A blend of the modern and the fantastic. Kenner achieves this feat through the vivid intricacies of his compositions and the thoroughly masterful improvisation that takes place throughout the album

Kenner’s rich harmonic content, undoubtedly stemming from the jazz idiom, coupled with his contrapuntal melodic arrangements demonstrates the artist’s deep knowledge of the vocabulary of jazz, as well as his prowess in classical composition.  In reference to his use of melody and countermelody, Kenner states “In Candyland, for example, you will encounter four main melodies dancing in syncopation all at once, creating the first main theme of the song. The main melody is at the front, the second one panned to the left, the third to the right, and the fourth is at the bottom, played by the bass. All four melodies are groovy and cerebral at the same time.”

Kenner makes use of analog instruments such as a Steinway piano, a Fender Rhodes, a Hohner Clavinet, and a Hammond C-3, but also uses state-of-the-art digital instruments to create a signature marriage of traditional and futuristic which an be best described as prog-soul.

Eitan Kenner has been playing the piano since the age of 5, and has been a student of jazz since 13.  In Israel, Kenner had the opportunity to study with the legendary, late jazz instructor Amit Golan, a pioneer of the Israeli bebop education movement.  Kenner’s father Avner Kenner is widely acknowledged as a prog rock pioneer in Israel, and that influence is heavily integrated into the pianists compositional style.  Kenner enrolled in the Rimon School of Jazz and Contemporary Music and was the youngest student in his class. After Rimon, Kenner moved to the United States to pursue a degree in Jazz Performance at Berklee College of Music.

Kenner’s upbringing and his voyage eastward inspired the creation of 8Ball City but it took several turbulent years of the artist’s life for his debut album to come to fruition. These years saw the painful end of an important relationship and the passing of his grandfather (a key figure in Eitan’s musical development) all amongst a backdrop of dealing with mental illness.

Kenner’s own words explain it best: "I was dealing with a very noisy and obsessive mind when it came to working on the album. I’d just incessantly trip over the tiniest details, always trying to solve musical issues, by thinking about them over and over again or listening to them on loop forever until i'd go crazy. I had the same approach to life itself. Thinking about life... thinking about thinking… and the loop goes on to no end. I didn't believe any one truth and was constantly trying to find "what's wrong" - that lead me to seeing and hearing things and feeling constant anxiety and of course, your usual depression that comes with it. this was debilitating to me both when it came to playing music, and - completing the album.”

Kenner eventually found peace through meditation practice, and eventually came to the realization that “playing music is the same as just living: some things you just don't know - sometimes there's "noise" in the background that you don't understand. You don't have to understand everything. But - understanding and thinking about this realization is just one thing. Actually practicing and living it is what I'm trying to pursue.”

"8Ball City" explores the unlimited nature of the mind and healing power that music can provide. It will not only take the listener on a journey to the fictional “8Ball City,” but will also take listeners on a journey of discovery in a tumultuous world.
Posted by Arnaldo DeSouteiro at 11:27 PM