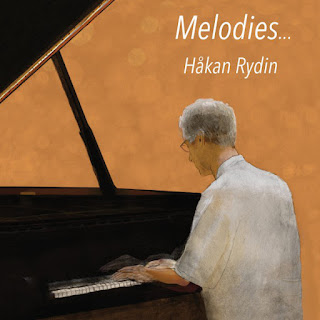 I've been listening a lot to this beautiful 2-CD set. Great originals and inspired renditions of Herbie Hancock's "Chan's Song" (from the "'Round Midnight" original soundtrack), "You're My Everything" (Harry Warren is one of my favorite composers, an underrated master), Sammy Fain's "A Certain Smile" (so good that Rydin rediscovered this lost gem recorded by Astrud Gilberto in 1965 on her Verve album with Walter Wanderley), Johnny Mandel's "Emily" and The Beatles' "Here, There And Everywhere." Rydin's performance is extremely elegant, focused, goes to the essence of the songs.

Håkan Rydin was an original member of the legendary Swedish group Nexus. The group performed, during 20 years, more than 1000 concerts in many parts of the world. Håkan Rydin played in Nexus until the group was dissolved in 1994. At that time he had already begun his longtime collaboration with American singer Kim Parker (daughter of Charlie Parker) and together they have toured all over the world. Shortly after Nexus was dissolved, he put his trio together with Hans Andersson and Mårgan Höglund. Their first CD "Beautiful Friendship" on Four Leaf Records (1996 - FLC CD 146), was very well appreciated and released in more than 10 countries.

In 2005, the trio CD "Tender Silhouette", recorded in Sun Studio in Copenhagen, was released on the Japanese label Marshmallow Records. The CD got 4 stars in the Japanese jazz bible Swing Journal, and also received very good reviews in Sweden. The CD "A Splendored Thing" (Sittel SITCD 9313), with a tentet, was released in 2007.

In 2019 the double CD solo piano titled ”Melodies…” (AdOpen18-002) is being released. CD1 is sub-titled ”Original, and more” and CD2 is called ”Standards, and more”. It was recorded in the VNAM concert hall in Hanoi.

Since April 2013, Håkan Rydin is Professor of Jazz Piano at the Malmö Academy of Music (Lund University). This man surely has  lot to teach to his students as well as to jazz listeners eager to find original voices in this universal music idiom.
Posted by Arnaldo DeSouteiro at 7:45 PM