Vocal Jazz CD of the Month - "Kevin Hays & Chiara Izzi: Across The Sea" 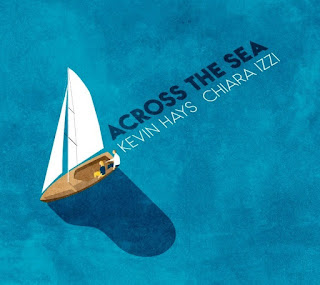 Jando Music and Via Veneto Jazz are proud to announce the release of "Across the Sea," the new collaborative album from award winning singer-songwriter Chiara Izzi and internationally acclaimed pianist and vocalist Kevin Hays. "Across the Sea" is brought to fruition by bassist and French hornist Rob Jost and drummer Greg Joseph, in the company of very special guests, Chris Potter on saxophone, Grégoire Maret on harmonica, Omer Avital on oud, Nir Felder on guitar and Rogério Boccato on percussion.

A work of ingenuity, imagination and passion, "Across the Sea" is a visionary journey between jazz and pop, America and Italy, dream and lyricism. The multi-lingual, pan-stylistic 10-tune recital comprises well-wrought original pieces and lyrics by each protagonist and highly personalized interpretations of songs from composers and songwriters who both artists love and admire. Izzi and Hays will celebrate this release at Birdland Jazz Club on February 28th at 5:30pm.

Producer Enzo Capua was first introduced to the talent of Chiara Izzi at a festival in Rome, many years ago. Although envisioning and encouraging a prosperous career for her, Capua had never imagined that he would not only reconvene, but collaborate with his fellow Italian artist years later in New York City. Rounded-out by pianist Kevin Hays and producer Giandomenico Ciaramella – a producer true to his noble spirit and amazing instinct, as admired by Capua – this quartet is the result of two fortuitous encounters which fate had wisely planned over time: that of two musicians so distant and yet so inexorably close, and two producers joined by their visceral passion for the art of sound.

"Across the Sea" displays an alluring serendipity between Izzi and Hays. As Capua recalls, the synergy between the duo was so lucidly evident during both the creation and recording stages of the album – “so intense is their harmony, so strong the unity of purpose, so rapid is the intuition that these two musicians share”. Hays recognizes Izzi’s sense of sincerity and honesty – “She has an inner strength that I think is rare.” Delivering a vocal that carries a warm, Mediterranean quality, Izzi acknowledges that Kevin’s playing brings out her best assets as a storyteller, singer, musician, and human being. The pair’s compelling predominance of melody, osmosis between vocals and keyboards and the amazing confluence of their singing voices, is eminent on this new album.

The French horn in the emblematic Henry Mancini musical poem “Two for the Road”, the ancestral oud in the classic Miles Davis tune "Nardis" (an old favorite of Bill Evans which became “Tierna Nardis” afterYanina Lombardi added Italian lyrics), the punctual and decisive harmonica on Pat Metheny and Hays’ “James”, the caressing guitar in the Izzi-penned “Circles of the Mind” and the sinuous saxophone in the pair’s original “Viaggio Elegiaco”, and specially Frederick Loewe/Alan Jay Lerner's haunting ballad "I've Grown Accustomed To Her Face" (rediscovered by Diana Krall & Claus Ogerman in 2008 on the "Quiet Nights" album) are just a few examples of what this converging work has to offer.

While each of the compositions of course, have form which the pair respects, the music resembles a live conversation with continuous inputs, which makes the dialogue more interesting, unpredictable and fresh every time.

Described by Jazz Times as “a talent to be heard, admired and anticipated”,Chiara Izzi has developed a unique sonic interpretation of a fusion of different genres, including jazz, pop and Mediterranean sounds. Following her international debut performance at the Montreux Jazz Festival Vocal Competition in 2011, at which Quincy Jones awarded her, the vocalist recorded her debut album Motifs (Dot Time Records). “Sister you are very, very talented. You should go to the U.S.," Jones encouraged Izzi at this early point in her career. Izzi moved to New York and has since performed at The Blue Note NY, The Iridium, Apollo Theater, Aspen Jazz Festival, Jazzahead, Smalls, as well as the Italian Embassy in Washington DC.

Having released 15 recordings as a leader, Kevin Hays has received critical acclaim from publications such as The New York Times, Downbeat Magazine and Jazz Times, as well as a “Coup de Coeur” from the Académie Charles Cros (France). A prolific sideman appearing on over 60 records, Kevin’s long list of notable musical associations include records with Chris Potter, Joshua Redman, Nicholas Payton, and Al Foster. The New Day Trio is Kevin’s latest project with bassist Rob Jost (Bjork, Tony Scherr) and drummer Greg Joseph (Steve Kuhn, Art Garfunkel). Developing over a 2 year residency at New York’s 55 Bar alongside tours across the US and Europe, the trio emphasizes lyricism with a musical scope bridging Hays’ love of jazz, classical, blues, soul, folk and rock music.
Posted by Arnaldo DeSouteiro at 7:45 PM