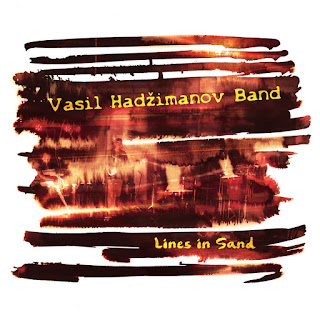 Punctuated by fiery improvisations, tight syncopations and a flowing, organic interplay, Vasil and his fellow maestronistas deliver the goods in this sizzling set. (... even paying homage to the label's founder Leonardo Pavkovic, with the wonderfully crafted second piece, "Mr. MoonJune.") Augmented by performances that are brilliant in substance, conception and cohesiveness, Hadzimanov's keyboard work is both sumptuous and towering, throughout.

The resulting product is crisp and dynamic: with a succinct focus, and execution that never lacks for soul, conviction or inventiveness. Thoroughly engaging, this is an essential work for fans of great keyboards, rich textures and adventurous sonic excursions, as well as dense ensemble work. Expounding on the unpretentious, groove-oriented style introduced on their first effort for MJR – 2016's critically heralded, "Alive" (featuring innovative NYC saxman, David Binney) -- "Lines In Sands" has a little bit of everything: a highly ambitious undertaking, witnessing the Balkan legend and band at their most potent and formidable. 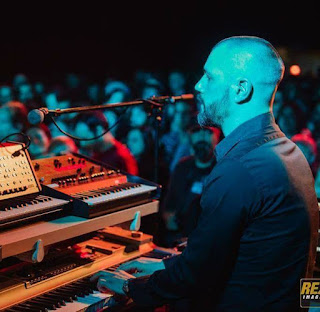 A name synonymous with Serbian jazz, Vasil Hadzimanov -- voted "Best Keyboardist of 2018" in the 40th Annual Jazz Station Awards -- is a contemporary pianist, composer, arranger, and educator whose lineage is intrinsically linked with ethnic Balkan music and cultural heritage. Ever the innovator, Vasil's musical vision and ambitions are complimented by an equally boundless work ethic.

Cultivating a passion for jazz and other creative forms of music, while first learning his craft as a budding youth, Vasil eventually found his way to the US -- specifically, Boston: where he attended the Berklee College of Music, graduating in 1995. Shortly thereafter, he returned to his homeland and formed the Vasil Hadzimanov Band: a band which continues to grow in popularity and notoriety -- still playing concerts, clubs and festivals, while having amassed seven critically acclaimed albums during a more than twenty-year run.

From their first release, 2001's "11 razloga za...", through 2018's "Lines In Sand," their sound is defined by its sheer ambitious, adventurous nature and stylistic diversity, and multiple elements and influences which greatly eclipse the jazz genre. In addition to the band's catalog, Hadzimanov also recorded a trio album -- 2011's "El Raval," with Martin Gjakonovski on bass and Aleksandar Sekulovski on drums.

A most enterprising, intrepid soul, Vasil has expanded his compositional and performing output to including scoring, directing and performing in numerous movies, documentaries and TV shows in the region. Reflecting a deep respect to his native musical traditions, his style often intertwines genres and subgenres with classic Balkan motifs -- producing music which often defies categorization.

His commitment to continually challenging himself and his fellow musicians is reflected in the freshness and vitality which has accompanied any of the numerous projects in which he has directed and/or contributed. Vasil Hadzimanov is a vital musical voice: a maestro performer, accomplished composer and a true, uncompromising torchbearer -- building upon a rich musical pedigree, while shrugging off clichés and expressive limitations.
Posted by Arnaldo DeSouteiro at 7:45 PM