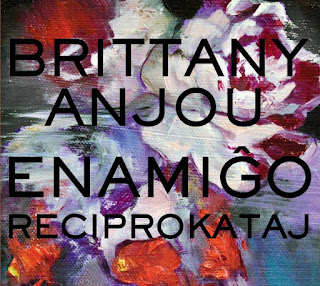 Pianist-composer Brittany Anjou blends the influences of a wide range of jazz and classical piano, and a fascination with the Esperanto language, on her stunning debut "Enamiĝo Reciprokataj," set for a February 15 release on Origin Records. A trio album featuring bassist Greg Chudzik and drummer Nicholas Anderson (as well as two tracks with special guests, bassist Ari Folman-Cohen and drummer Ben Perowsky), it also includes 10 original compositions, highlighted by an eponymous five-part suite that showcases both Anjou's ambition and her originality.

"Enamiĝo Reciprokataj" (pronounced En-ah-mee-joh Reh-sih-pro-kah-tye) translates into English as Reciprocal Love -- or, alternately, as Mutual Breakdown. "[It's] a double entendre about improvisation and the push/pull of relationships," Anjou writes. She also refers to multiple levels of relationships: "It represents the enigma improvisers face to spontaneously fall in love with their instrument/the sound/the situation/each other," she says. "And additionally, to convince an audience to fall in love with their love."

Anjou's use of Esperanto is not incidental: with "Enamiĝo Reciprokataj," she begins a planned trilogy of albums based on the concepts and structures of world languages. (The next two installments will center on Dagara and Arabic, respectively.) "To me, Esperanto is a romance," she says. "The language mirrors jazz improvisation . . . . Jazz and Esperanto are both contemporary languages of the last century, and both promote intercultural dialogue, democracy, and self-expression." 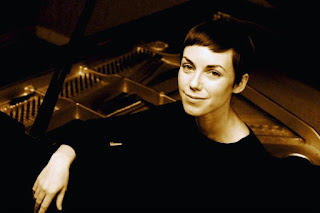 Brittany Anjou will perform CD release concerts at Le Poisson Rouge, 158 Bleecker Street, NYC, on Mon. 2/25, with Chudzik and Tinnin. Anjou will also be playing with the Women in Jazz Organization collective at Jazzahead (Schwankhalle), Bremen, Germany on Sat. 4/27.