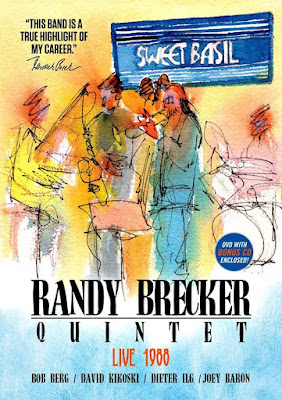 For three decades, I've dreamed to watch the live performances by the Randy Brecker Quintet that yielded the album "Live At Sweet Basil," released in Europe, in June 1989, by the Swedish label Sonet on both vinyl and CD formats. One month later, I was able to buy the CD in a Munich record store, while on vacation after having attended the Montreux Jazz Festival.

The group performs on a telephathic level. Randy proves to be the best trumpet player of his generation, and one of the all-time greatest jazz musicians. The much missed Bob Berg was my favorite tenor player in the 80s, after Michael Brecker. Pianist David Kikoski (sometimes also using a small keyboard placed above the piano), bassist Dieter Ilg (a monster in the Niels Pedersen tradition) and drummer Joey Baron (reminding me a lot of Tony Williams on those nights) are on fire, killing in all songs.

The video quality has some imperfections, but the musical performances are flawless. Highly recommended and, surely, one of the most important releases of 2018.

"As I said in the liner notes on the original release at the time: “This band is a true highlight of my career” and that statement is still true some 30 years later! The original Vinyl LP ‘dropped’ on June 15 1989. CDs were still being established as a competitive format and ‘dropped’ meant that something had fallen on your toe. It ‘came out’ to really great reviews, and being that all of us were close friends, we were all thrilled at the reception.

This was all brand new music played for the very first time that week at Sweet Basil, so everything was fresh, and Sweet Basil was the happening Jazz Club at the time, with the best ambient sound in NYC due to its wood floor and walls.

Bob Berg, I had been associated with for many years since the late 60’s with the Free Life Communication organization started by Dave Liebman and I had guested on some of Bob’s great recordings. He had a sound and intensity in his playing all his own and was a big part of the Liebman, Brecker Grossman, Berg tenor saxophone conglomerate.

Dave Kikoski who I had first heard with the great Roy Haynes, had some deep swing in his step, and reminded me of Phineas Newborn. After hearing him, I immediately hired him for my record ‘In the Idiom’.

Dieter Ilg I had met on a gig in Europe, and I was impressed with his technique and unique conception leaving  ‘harmonic sonic holes’ for you to jump through.

As for Joey Baron, what can I say? He had played with everyone from Al Jarreau to John Zorn, and could play absolutely any style with complete authenticity and originality.

We did some tours of Europe, had great fun together, and the music was always spectacular… I went to Sweden around a year later and met with Dag Haggqvist my old friend from Sonet Records who had originally recorded, filmed and released this. We looked at the video to maybe edit it, and Dag exclaimed after viewing it…”Let’s just leave it as it is!” The music was so great it was impossible to edit.

But then one thing after another happened in the music business, and things got stalled, and then stalled some more, and it wasn’t until Ed Seaman of MVD Entertainment in Pottstown, PA got involved in a co-production with Dag and his newer company: Gazell Records AB from Stockholm, that this video is finally seeing the light of day as a DVD all these years later. So thanks go out to them for saving the life of this performance, and another thanks for all the hard work that went into in releasing it.

Eventually the five of us went our separate ways but stayed friends. Everyone became bandleaders and started doing ‘their own thing’. Then sadly on Dec 5th, 2002 Bob Berg was killed in a tragic traffic accident on Rt 27 out near where we both lived in the Hamptons, on a snowy afternoon...a cement truck skidded into his lane and he was gone.

So this DVD, finally released after so many starts and stops, is dedicated to his memory. He’s at the top of his game here. May his sound and his one-of-a-kind personality live on…"
Posted by Arnaldo DeSouteiro at 11:45 PM