Sylvia Brooks takes an Unplugged version of "The Arrangement" to Palm Desert, tomorrow! 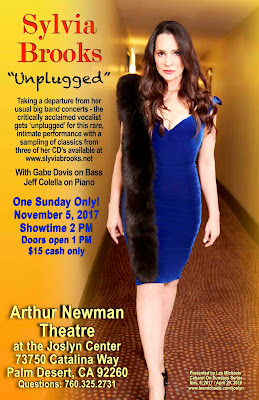 Known for her ‘big band sound’, Sylvia Brooks was born into a musical family. Her mother, Johanna Dordick, was an opera singer who founded the Los Angeles Opera Theater, and her father, Don Ippolito, was a jazz pianist and arranger who wrote for big bands and toured with such greats as Buddy Rich and Stan Getz.

Ms. Brooks studied at the American Conservatory Theater in San Francisco and has performed in a number of musicals. One of her favorite roles was Dorothy Brock in 42nd Street, which she has played in several productions throughout the country. On television she has been a guest star on Designing Women, Dallas, Baywatch, and Beverly Hills 90210 to name a few. She has worked with the “Who’s Who” of the music world, and her voice and singing style have brought her three CD’s including, “Dangerous Liaisons”, “Restless”, and her latest, “The Arrangement”, whose critical acclaim has her currently considered for a Grammy nomination as Best Female Jazz Vocalist.

For her Sunday, November 5th “Unplugged” show, Sylvia leaves her usual five to 10 piece band at home, opting for a more intimate vibe with her bass player, Gabe Davis, and pianist and musical director, Jeff Colella.
Posted by Arnaldo DeSouteiro at 7:22 PM