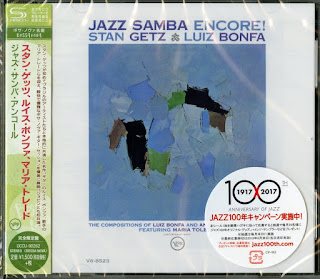 The first album ever recorded by Stan Getz with a Brazilian musician, sounding much better than the historic "Jazz Samba" recorded in 1962 with Charlie Byrd, which had yielded the hit single "Desafinado." This splendid session with Bonfá - which kills when soloing on "Um Abraço No Getz," "Saudade Vem Correndo," and "Mania de Maria" - also features the talents of Bonfá's wife at that time, songstress Maria Toledo.

Besides the songs she co-wrote with Bonfá ("Menina Flor," "Mania de Maria," "Saudade Vem Correndo"), Maria Toledo is also featured doing wordless vocals on the opening track, "Sambalero" (aka "Sambolero"), as well as singing the Portuguese lyrics to Jobim's "Insensatez" ("How Insensitive"), a track that has been included in over 50 compilations since the original LP release in May 1963.

It's worth to mention that "Jazz Samba Encore!" remained for 11 weeks in the Billboard Pop Charts, reaching # 88 in the Top 200, something very rare for a jazz album. When reviewing Stan Getz's "The Bossa Nova Years" 5-LP box set released by Verve in 1989 (reissued as a 4-CD box set in 1991), DownBeat stated that Maria Toledo had been the best singer that ever recorded with Getz.
Posted by Arnaldo DeSouteiro at 5:43 PM