Fusion CD of the Month - "Mauricio Zottarelli: Upside Down Looking Up" 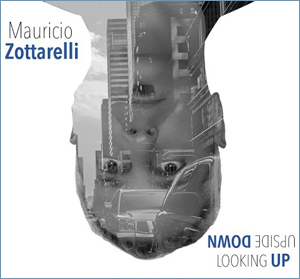 The brazilian-born and New York City–based drummer and composer Mauricio Zottarelli has been on the forefront of the Jazz, Latin and Brazilian music circles for many years. Called a “superb drummer” by JazzTimes Magazine, Zottarelli has become one of the most sought after drummers on the scene since his move to NYC in 2006.

Mauricio co-leads the Dig Trio, which had its critically acclaimed first album out in 2003. In 2009 Zottarelli released "7 Lives," his first album as a leader, and in 2011 came “Mozik,” a collaboration project with pianist Gilson Schachnik. Both "7 Lives" and "Mozik" have been receiving high praises from critics and fans worldwide. Mauricio has been consistently featured on the our “Jazz Station” website as one of the top 10 drummers of the year since 2011, and in 2012 he won the “Brazilian Music Awards”, for his work with legendary pianist Dom Salvador.

In 2014 Mauricio released a collaboration with bassist Amanda Ruzza, “Glasses, No Glasses” featuring Leo Genovese. Now, in November 2017 his highly anticipated new recording as a leader, “Upside Down Looking Up” is coming out. Mauricio is equally active as a teacher and educator, and has performed clinics and workshops in Brazil, USA and Europe. He is also a columnist for Modern Drummer magazine in Brazil.

About the brand new album "Upside Down Looking Up," says Mauricio: "This new album and the music in it have to do with those moments in life when a person feels completely overwhelmed with everything that is going on. The idea of the title, Upside Down Looking Up, came to me one day while thinking about how when life feels crazy and we believe it’s “upside down,” if we “look up” searching for a solution, we are actually looking down. So, in order to figure out a way to navigate through the craziness, and find clarity and ultimately get out on the other side, we may have to embrace a significant change in our lives - a change in our life's perspective. As I was going through my own "Upside Down Looking Up" phase in the last few years with a lot of things going on in my life while I was creating the music for the new album, the music took shape and the story and message of the album was then very clear to me. I hope that this music can successfully communicate with you as it did with me, and perhaps inspire you to reevaluate any areas of your life, which may need it. May newer, better and healthier life cycles begin!"
Posted by Arnaldo DeSouteiro at 5:43 PM