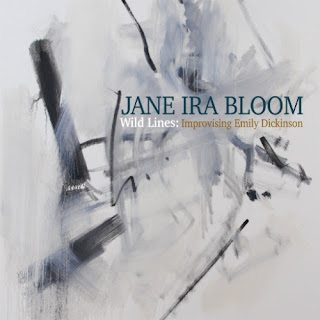 All tunes by Jane Ira Bloom, except "It's Easy To Remember" (Richard Rodgers & Lorenz Hart)
Readings from poetry & prose by Emily Dickinson and adapted from "Emily Dickinson and The Art of Belief" by Roger Lundin
"Wild Lines" was made possible with support from Chamber Music America's 2015 New Jazz Works Program funded through the generosity of the Doris Duke Charitable Foundation

After the success of her 2016 trio album release "Early Americans," Bloom shifts gears with "Wild Lines / Improvising Emily Dickinson" (OTL143) showcasing her acclaimed quartet in dialogue with poetry in her seventeenth album and first foray into music and text. Her sound is like no other on the straight horn and she lets it fly with long-time band mates Dawn Clement (piano), Mark Helias (bass) & Bobby Previte (drums). Adding the Emily Dickinson narrative to the ensemble on disc 2 is acclaimed actor Deborah Rush.

Bloom composed "Wild Lines" when she was awarded a 2015 CMA/ Doris Duke New Jazz Works commission. She was inspired to musically reimagine Dickinson when she learned that the poet was a pianist and improviser herself, reconfirming what she'd always felt in the jazz-like quality of Dickinson's phrasing. "I didn't always understand her but I always felt Emily's use of words mirrored the way a jazz musician uses notes," Bloom states.

"Wild Lines" premiere at the poet's home in Amherst, MA was followed by performances at the Kennedy Center and the NYPL for the Performing Arts. The ensemble then headed into Avatar Studios to record in stereo and surround-sound with renowned audio engineer Jim Anderson. The album features fourteen Bloom originals inspired by fragments of Dickinson poetry and prose mined from both her collected works and envelope poems The Gorgeous Nothings.