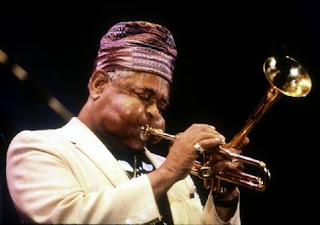 YOU WON'T WANT TO MISS THIS VERY SPECIAL SHOW!

Trumpeter, Bandleader, Educator and NEA Jazz Master Jimmy Owens, one of the founders of the Jazz Foundation of America/Jazz & Blues Emergency Fund is a fine hard bop soloist.  He started on the trumpet when he was ten and later studied with Donald Byrd. Owens has played as a sideman with many major players, including Lionel Hampton, Hank Crawford, Charles Mingus, Herbie Mann, Duke Ellington, Gerry Mulligan, Count Basie, the Thad Jones/Mel Lewis Orchestra, and the Dizzy Gillespie Reunion Band. He was one of the founders of the Collective Black Artists.

Jazz Singer, Actress, and NEA Jazz Master Annie Ross moved with her aunt,singer Ella Logan, to Los Angeles at the age of three, where she became a juvenile film actress, starting on the "Our Gang" series at five. Asa teenager, she moved to New York to study acting, then back to England, where she became a nightclub and band singer. She returned to the U.S. and gained attention in 1952 for her song "Twisted," a "vocalese" setting of humorous lyrics to what had been a saxophone solo by Wardell Gray. (More than 20 years later, Joni Mitchell made a popular recording of the song.) In 1958, Ross teamed with Dave Lambert and Jon Hendricks in the vocalese trio Lambert, Hendricks & Ross, and they toured and recorded successfully, their best-known album being their first,"Sing a Song of Basie." Ross left the trio in 1962 and settled in England, continuing to sing and work as an actress. She returned again to the U.S. in 1985. In 1993, she had a featured role in the Robert Altman film"Short Cuts."

The John Birks Gillespie Auditorium, dedicated to the late jazz great  Dizzy Gillespie, who was a Bahá'í, is located within the New York City Bahá'í  Center in the heart of Greenwich Village. Beginning on January 6, 2004, the  anniversary of Dizzy's death, his former pianist and musical director, Mike Longo, began presenting weekly jazz concerts every Tuesday evening at 8:00.

Remember, it don't mean a thing if it ain't got that SWING!

For more about the NYSAJE and other acts at "Jazz Tuesdays", check out our website at www.jazzbeat.com
********
Jazz Tuesdays
in the John Birks Gillespie Auditorium
The New York Baha'i Center
53 East 11th Street (between University Place & Broadway)

One Show at 8:00:  Concert followed by film of Dizzy
**********
Jazz Tuesdays is brought to you in part by grants from the Wilbur, Dorothy, and Frances Rose Davis Family Fund; the Hunt Family Fund; and the DeChristopher Family Trust.
Posted by Arnaldo DeSouteiro at 7:35 PM