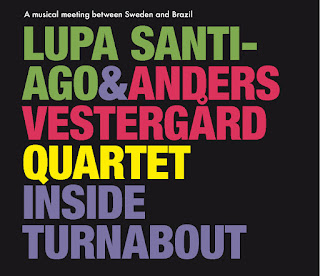 Lupa Santiago and Anders Vestergard are delighted to release their album "Inside Turnabout" tomorrow, October 27! Featuring saxophonist Rodrigo Ursaia and bassist Mattias Hjorth, "Inside Turnabout" is a follow up to their successful debut "Lisbon Sessions". This esteemed and skillful quartet have come together to present a collection of recordings which showcase modern jazz with compositions from both leaders.

"Inside Turnabout" was recorded outside Malmö, Sweden in February 2017. Although Santiago and Vestergård originally intended to devote this time to touring their debut "Lisbon Sessions", along the way, they began to collaborate and compose with Brazilian saxophonist Rodrigo Ursaia. Santiago and Ursaia are long time musical partners and upon coincidentally touring Europe at the this time, they seized the opportunity to experiment with a new group and new repertoire.

Anders, upon listening to Rodrigo's work,  found the identification of the saxophonist's sound with his compositions and called on the great Mattias Hjorth. "Mattias has an amazing groove and deep knowledge of the contemporary jazz language and added a lot to the recipe", said Santiago. The quartet was formed and the result is an album with fresh compositions, challenging harmonies and a myriad of grooves that mix Latin, Brazilian and hybrid rhythms  - an open invitation for the listener to dive in! 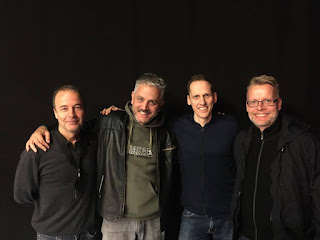 In addition, some of the artists and groups he has worked with in Brazil include Roberto Menescal, Cuca Teixeira, Nelson Faria, Sizão Machado, Vinicius Dorin, Edu Ribeiro, Helio Alves, Daniel D'Alcântara, Rogério Bocato and Nenê.

Santiago has a Master's Degree from The Boston Conservatory & Berklee College Of Music. He also graduated from The Musicians Institute (GIT/Los Angeles, USA).  Since July 2010, he has been a member of the IASJ board of  directors  (International Association of Schools of Jazz). He is the Coordinator and Vice Director of the Souza Lima Conservatory. He has released two instructional dvd's, Modern Improvisation I and II, and three books, Modern Improvisation I, Odd Meters in Brazilian Music (Play Along) and Dictionary of Chords and Voice Leading (Advance Music/Editora Souza Lima). He was a member of the judging panel at the Best Musical Mind Festival (Belgrade/Serbia 2016). Lupa also has a Radio Jazz Program every week at Radio Eldorado (Sao Paulo).

Born in Finland in 1971, Anders moved to Sweden in 1995 to study music at Skurup Folk High School and Malmö Music Academy. Since then he has established himself as a renowned drummer, who is highly involved in the modern jazz scene of Sweden.

Using influences from jazz, free improvisation, African, Brazilian and Cuban music he has a big palette to draw from in his playing and is always striving to combine tradition with new ideas. He's been part of various projects both as a co-leader and leader, playing and touring in Europe, United States, Russia, Latin America and South Africa. Anders is currently running the independent record company "Drumvoice Records", playing and recording with his own group West Yard Jazz Quartet, the Congolese singer José Pereelanga, Lupa Santiago & Anders Vestergård Quintet, as well as with Robert Tjäderqvist Quartet, Emma Denward Quintet and Monica Hoffman Quartet.

Besides his performing career Anders has always been a dedicated teacher presenting workshops and lectures as early as 1988. He is head of the Culture Department at Fridhems Folk High School and a drum teacher at Malmö Academy Of Music.
Posted by Arnaldo DeSouteiro at 10:14 PM