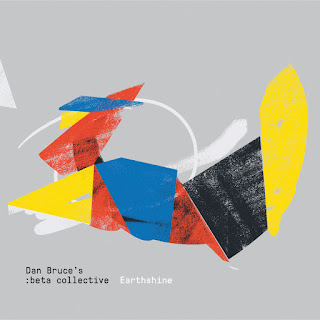 Guitarist and composer Daniel Bruce, along with his group beta collective, are delighted to release their debut album "Earthshine" on ears&eyes Records tomorrow, October 20! Bruce is excited to celebrate the release of "Earthshine" in his hometown of Chicago, on October 26th, at Constellation.

Innovative Chicago-based guitarist and composer Dan Bruce announces the arrival of his newly established sextet beta collective with the October 20th release of their debut album as a group and Dan's sophomore album as a leader: "Earthshine" on ears&eyes Records. beta collective exhibits the versatility, creativity and prowess of some of Chicago's finest improvisers on today's jazz scene. With Russ Johnson on trumpet, Chris Madsen on tenor saxophone, Rob Clearfield on piano/fender rhodes, Clark Sommers on bass and Jon Deitemyer on drums, the beguiling Dan Bruce is excited to present this project which highlights the relationship between order and chaos, and the importance of truly accepting both in one moment.

With the thematic focus of order and chaos at the forefront, Bruce explains that "Earthshine" showcases the "significance of entwining deftly composed music with free improvisation, while constantly incorporating expansive and driving grooves." As the term "earthshine" refers to the glow caused by sunlight reflected off the earth, Bruce explains that, for him, looking up at the moon once a day is an easy way to remember his place and to stay grounded and in the moment.

The bandleader makes a conscious effort to know his surroundings and point his creative compass in the right direction. However, he also has a particularly strong ability to accept chaos, or rather moments of improvisation, when they happen and when they work."So when I am fortunate to make music with people on the level of this group, I can just tell myself 'look up and remember you are not in control'."

From the outset the title track invokes the feeling, which Bruce refers to as a spiritual experience, of standing alone in a vast open landscape. "I've been lucky to experience a number of breathtaking places on Earth, whether in Scandinavia, the Mediterranean, Africa, Canada, or the American West. Standing in these places I am always deeply impacted by the dual feelings of insignificance and joyous gratitude." In the piece, meandering melodic phrases overlap into each other, masking cadences and creating a feeling of searching and longing. This builds and eventually culminates in a meditative rhythmic vamp with traces of Arabic traditional music.

"Ice no.2" is dedicated to the artwork of Gerhard Richter. His series of four paintings titled Ice is in the Modern Wing of the Art Institute of Chicago. Bruce explains, "When I first sat in the room with these paintings I was brought to tears. Richter uses layers and motion in the paintings to give us glimpses of vibrant colors coming through the top layer of stillness and cold. For me, the pairing of the nylon string guitar and Fender Rhodes achieves a similar effect. The two instruments have very different timbres, but go together beautifully." Bruce's guitar sets the tone in this piece with a repeated rhythmic motive, and Clearfield's casual melody line breaks through that texture.

Not every piece has such a profound back-story. "Sofa" is a haunting track that invokes a trance-like, semi-conscious, lethargic state of being and is dedicated to a wonderful couch that Dan and his wife once owned.

Dan's debut album as a leader, "A Single Thread" was released to critical acclaim in 2007, with Martin Gladu of All About Jazz noting that the album "...combines his learned guitar work, which is at times reminiscent of Ben Monder, with substantive yet airy, contemporary sounding compositions." Ten years later, this highly-anticipated new project, with the help of a melting pot of musicians, opens an exciting new chapter in Bruce's career as a writer and guitarist. Dan assembled this particular ensemble knowing that each member would bring the risk, immediacy and spontaneity that was crucial to "Earthshine"'s core hallmark.

Throughout the composition, arrangement and recording of "Earthshine", Bruce made a conscious decision to approach the project as a composer first and guitarist second. The pieces are written to utilize the various textures available within the sextet instrumentation, and a number of the pieces were written to highlight specific group members.

Although listeners will hear a good deal of his guitar playing on the album, the overall sound as a group is of paramount importance to Bruce. His principal goal as a composer is to "get out of his own way, take himself out of the driver's seat and see what happens". With this compositional approach and the incredible lineup, "Earthshine" achieves a staggering range of texture and impressive variety of orchestration, while maintaining a steady and relatable lyricism throughout.
Posted by Arnaldo DeSouteiro at 8:57 PM