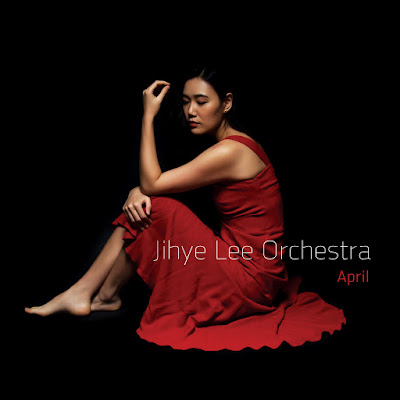 Composer/bandleader Jihye Lee releases her sumptuous and heart-rending debut recording titled "April" tomorrow, February 24. The album features a 20-piece orchestra culled from Berklee faculty and Boston-area musicians, with Sean Jones as special guest. Inspired by the Sewol ferry disaster of 2014 in South Korea, Lee's original six-song suite explores the myriad conflicting emotions that a tragedy can engender, vividly embodied by an orchestra that can navigate fluidly from visceral force to impressionistic beauty.

On the morning of April 16, 2014, tragedy struck South Korea when the ferry Sewol capsized and sank, killing more than 300 passengers. Half a world away, composer and native Korean Jihye Lee watched on in horror from Boston, where she was studying at Berklee College of Music. As the hours, days, weeks and now years have passed, reactions to the disaster have mingled grief and anger, sorrow and outrage, protest and sympathy as human tragedy collided with political controversy.

Not long before the wreck of the Sewol, Lee had written two pieces that came to prove eerily prophetic: "April Wind," which gradually builds from gentle and tender to majestic and powerful; and "Deep Blue Sea," through which Lee's soaring voice wends an emotional, wordless lament before being overwhelmed by swelling tides of sound. "Destiny is a big word," Lee admits, "but maybe I was meant to make this album."

Lee expanded upon those two compositions in the wake of the Sewol disaster, creating the heartfelt six-song suite that comprises her new album, "April." Performed by a 20-piece orchestra culled from Berklee faculty and Boston-area musicians, the album (due out tomorrow, February 24) explores the myriad conflicting emotions that a tragedy like the ferry crash can engender, vividly embodied by an orchestra that can navigate fluidly from visceral force to impressionistic beauty. Lee composes from a wide palette, at one moment lush watercolors, the next bold splashes of action painting.

Being so far away from home as events unfolded, Lee says that the worst feeling was being unable to contribute to rescue and relief efforts. "If I were in Korea I would have done something," she says. "But in Boston there was nothing to do. My mind was so chaotic, I couldn't help but write this music."

"April Wind" opens the album, the calm before the storm that sets the scene for the events of the day to unfold. Alain Mallet's piano solo rides the orchestra's cresting waves, while Shannon LeClaire's alto and Allan Chase's soprano usher in the rising tide. It's followed by "Sewol Ho," named for the ferry itself, which begins with John Lockwood's churning, ominous bass, soon joined by frantic, cross-talking horn lines which build in tension and urgency. "Deep Blue Sea" is an oasis of serenity, seemingly peaceful but perhaps suggesting the stunned silence following unimaginable horror. Rick DiMuzio's tenor offers a soulful elegy.

The brisk, manic rhythms of "Whirlwind" capture the chaos of the sinking's aftermath: the frenzied worry of victim's families, the unanswered questions and political turmoil that persist nearly three years later. "Guilty" is aimed squarely at those whose neglect, greed and politicking led to the tragedy and its staggering death toll, the composer's seething contempt for the deceit and disregard for human life mutedly expressed in the tug of war between Bruce Bartlett's guitar and Rick DiMuzio's soprano. Finally, "You Are Here (Every Time I Think of You)" is Lee's outpouring of sympathy for those lost and those left behind, highlighted by the aching, sweepingly gorgeous flugelhorn of guest soloist Sean Jones.

The band was assembled and the album co-produced by trumpeter and longtime Berklee professor Greg Hopkins. "Greg really believed in me and my music," Lee says. "When I shared my vision he was really supportive." Hopkins also helped Lee set up the Kickstarter campaign that funded the album's recording.

Given the singular vision of Lee's writing for big band, which calls to mind the bold narratives and colors of the Maria Schneider Orchestra along with the intricate arrangements of Jim McNeely, with whom she's now studying at the Manhattan School of Music, it's surprising to learn that Lee arrived in Boston with no intention of leading an orchestra and very little knowledge of jazz in general. She'd worked primarily as a folk and R&B-influenced pop singer-songwriter in Korea but came to Berklee hoping to expand her musical horizons.

"I wanted to see something that I didn't see when I was in Korea," she recalls. "I really loved complexity in harmony and rhythm, but I didn't know what genre I could find it in. I just followed my gut, and my gut said you have to go to Berklee. I got to see a lot of concert jazz orchestra music there, and I was overwhelmed. I was enchanted by the energy and complexity, the richness and diversity that we can mix and use in different ways. That's how I got into jazz big band writing."

One of the most striking elements of Lee's pieces throughout April is the way she interweaves her own voice into the orchestral palette. She doesn't write lyrics, uncomfortable with penning words in English, but doesn't see the lack of them as inhibitive of communicating her messages. "Lyrics are too specific to convey some images or emotions that I cannot really express with words," she says.
The use of voice, though, came naturally from her background as a singer. "It was only natural. I think people are very drawn to the human voice because we're all human, and there's some things that only voice can express."

While she doesn't draw on explicit influences from her native country, Lee says that her essential Korean-ness comes through in every note that she writes. "Korean people are very emotional, very expressive," she explains. She mentions a Korean expression, han, that connotes a sense of deep, restrained emotion rooted in the country's long history of war and colonization, similar to the melancholic/nostalgic Brazilian term saudade but in an earthier, more inward form. The stoicism they display on the surface means that their sadness comes through in art as a howl of sadness. "I think it naturally comes through in my melodies: dramatic, lyrical, very sad, that kind of emotional statement."

The title "April" ties into her adopted home of Boston as well, given that the Boston Marathon bombing took place one year almost to the day prior to the Sewol. Lee hopes that her music offers a path to healing from both incidents. "April is a beautiful month, the beginning of spring when everything is new and beautiful and blooming," she says. "I want to make April bloom again."
Posted by Arnaldo DeSouteiro at 11:02 PM