Blu-Spec CD of the Month - "Stanley Turrentine: The Sugar Man" 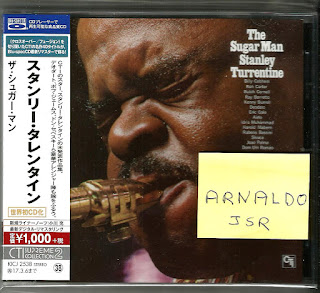 AT LONG LAST the CTI fans will be able to listen the original mix of "Pieces Of Dreams" that was destroyed when that track was remixed for inclusion on the CD reissue of Turrentine's "Don't Mess With Mr. T" album).

The original vinyl release was issued soon after Turrentine jumped from CTI to Fantasy Records, and released an album titled "Pieces Of Dreams" as the first project on his new label. Creed Taylor remembered that Stanley had recorded the Michel Legrand tune in 1973, during the sessions for "Don't Mess With Mr. T" but the track never made the final album.

When "The Sugar Man" was rush-released, CTI added a big red stamp to the front cover, on which was written: "Includes the Original Pieces Of Dreams."

Curiously, many jazz radio stations gave airplay to both versions, and the two albums made the Billboard and Cash Box jazz charts. The jazzy CTI track, with a lush arrangement by Bob James -- featuring the infallible Ron Carter on bass, Idris Muhammad's backbeat on drums, Brazilian master Rubens Bassini adding a latin spice on the congas, and a perfect Rhodes solo by Harold Mabern -- is far superior to the more pop & r&b-oriented Fantasy track, arranged by Gene Page.

Milton Nascimento's "Vera Cruz" is a new mix (without the Hammond organ that Deodato had overdubbed for the original mix) of an instrumental track originally recorded in 1971 for the "Gilberto with Turrentine" album, arranged by Deodato with an all-star Brazilian rhythm section: Joao Palma on drums (what a brilliant brushwork!), Dom Um Romão and Airto on percussion, Sivuca on acoustic guitar and, of course, Eumir Deodato himself on Fender Rhodes.

Turrentine's own "The Stretch" is a nice 'n' easy blues, with Kenny Burrell on the guitar and Ray Barretto on congas, but I don't like the abrupt fade-out. Much more interesting, "Make Me Rainbows," written by Grammy winner John Williams for the movie "Fitzwilly" at the beginning of his career, and made famous by Ella Fitzgerald, receives an impecable rendition featuring Carter, Burrell, Barretto, drummer Billy Cobham and organist Butch Cornell.

On two tracks, Sebesky and Chico O'Farrill joined forces as arrangers: "More," another movie theme from the Italian movie "Mondo Cane," and the haunting ballad "Just As I Am," with a wonderful warm performance by Turrentine. Sebesky provided the rhythm track arrangement -- played by Carter, Cobham, Barretto, Cornell, Dave Friedman on vibes, and guitar hero George Benson --, while O'Farrill added the horns score played by trumpeter Blue Mitchell (also on his only CTI session), reedman Jerome Richardson on sax & flute, and Curtis Fuller on trombone.