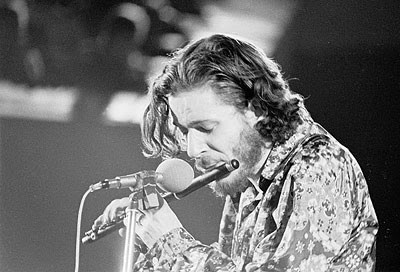 So sad to be informed about the passing of one of the world's greatest flutists, Jeremy Steig, to whom I was introduced through his recordings for the CTI label in the 70s; his own "Firefly" album, that was released in my native Brazil, as well as sessions with Art Farmer, Lalo Schifrin, Urbie Green, Idris Muhammad and Hank Crawford.

Son of famed cartoonist William Steig, he started playing a recorder at age 6, and begun studying flute seriously at 11 with Paige Brook, then a member of the New York Philharmonic Orchestra. He went to high school with Eddie Gomez, something that later would lead him to play often and even record with both Bill Evans and Gomez.

"I bought a Clifford Brown/Max Roach record, and realized that I had been playing jazz all along, without knowing the word. Back in the 60's, I used to sit in with everybody. Back then, musicians weren't so protective of their territory, and they all let me sit in with them. I sat in with a wide variety of musicians, and with rock bands, too. I found I could keep my "soloing integrity" while playing over a funky beat, "Steig told in an excellent interview to Scott McIntosh.{http://www.angelfire.com/ny/bolinfan/interviews/steig.html} 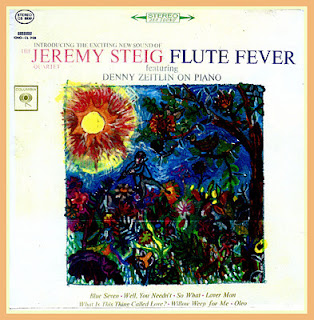 Early in his career he played in a band which included Paul Bley and Gary Peacock. Discovered by producer John Hammond, he signed with Columbia and released his debut solo album in 1963, "Flute Fever: Introducing The Exciting New Sound of the Jeremy Steig Quartet," with Denny Zeitlin (piano), Ben Tucker (bass) and Ben Riley (drums), playing mostly bop standards by Miles Davis ("So What"), Thelonious Monk ("Well, You Needn't") and Sonny Rollins ("Oleo"). Steig himself did the drawings for the album cover and back cover. And, btw, he continued to paint till his final days. 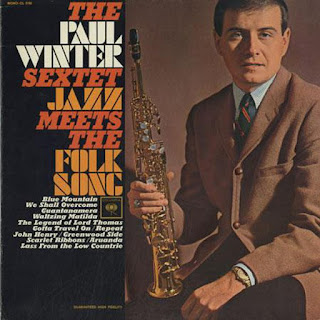 Steig also joined the Paul Winter Sextet (recording "Jazz Meets The Folk Song" in 1964), and toured Brazil with that group in 1965, when he, Winter and other members of the band were invited by arranger Eumir Deodato to record on Marcos Valle's second album for Odeon, "O Compositor E O Cantor." [none of the musicians were credited on the original pressing....]

In the late '60s, Steig played with Richie Havens before joining Tim Hardin's backing band and then forming his own rock-influenced band, Jeremy And The Satyrs, with Adrian Guillery, Donald McDonald, Eddie Gomez and Warren Bernhardt. 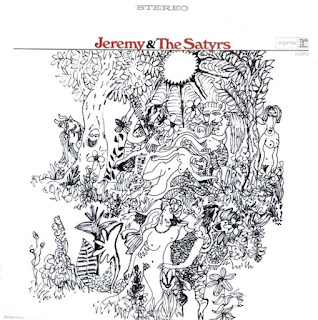 According to Ron Wynn on the prestigius All Music Guide website, "One of the earliest and finest jazz-rock flutists, Jeremy Steig is an outstanding soloist. He's mastered the entire flute family, including bass, and also plays piccolo well. He has a similarly rich, classically pure tone and timbre as James Newton or Hubert Laws [I disagree completely, 'cause they have very different styles], and uses almost as many devices, such as tongue fluttering, humming, and swirling lines."

Actually, Steig also incorporated electronics such as the wah wah peddle and ring modulator. He has continued to work as a soloist and with his own groups, although he has also performed with Mike Mainieri, Bill Evans and Art Blakey in the 60s, and with Jan Hammer, Pierre Courbois' Association PC and Tommy Bolin in the early 70s. Below, he is pictured with Eddie Gomez. 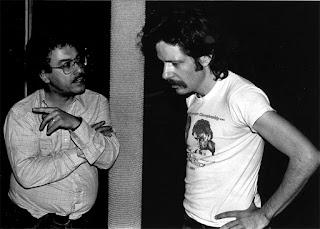 "I sat in with the Bill Evans Trio (their last set) every night, for about 10 years, whenever they played New York," he told Scott McIntosh. Steig also played a lot with Joe Chambers during the '70s, and did sessions with Mike Nock, Karl Ratzer, Naná Vasconcelos, Ray Barretto, Steve Gadd, and Jack DeJohnette in the '80s. 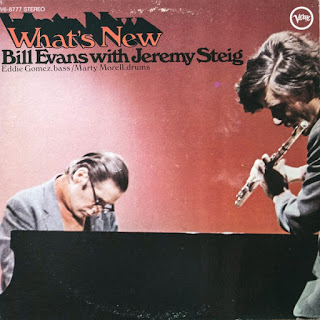 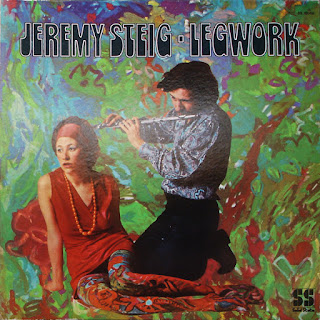 Other famous albums are "Legwork" (Solid State), "Energy" (Capitol), Wayfaring Stranger" (recorded for Blue Note in 1971), and "Outlaws" (a duet with Eddie Gomez for Enja in 1976.) 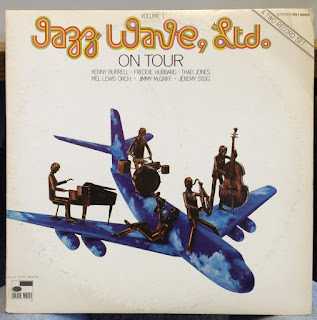 A somehow obscure 2-LP set, "Jazz Wave, Ltd. On Tour" was recorded live in Europe in December 1969, and released in 1970 on Blue Note, with previously unreleased tracks by Jeremy Steig, Kenny Burrell, Freddie Hubard, Jimmy McGriff and the Thad Jones/Mel Lewis Orchestra. The highlight is a killer version of Edu Lobo's "Reza" performed by Steig with a trio that includes Ron Carter and Louis Hayes, and which runs for over 12 minutes! The flutist returns on "Once Around," which has Steig, Hubbard, McGriff, and Burrell all soloing madly over a 16-minute side-long number written by Thad Jones and supported by the Jones/Lewis big band. 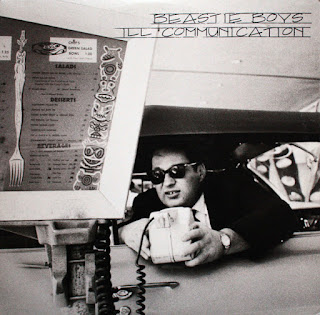 "Howlin' For Judy," the much sampled opening track from Steig's 1970 LP "Legwork" became an acid jazz hit and hip-hop favorite in the 90s, after it was sampled on Beastie Boys' "Sureshot," the opener from their 1994 album "Ill Communication." It was used as title track for a best-selling Steig CD compilaton released on the Blue Note label in 2008. 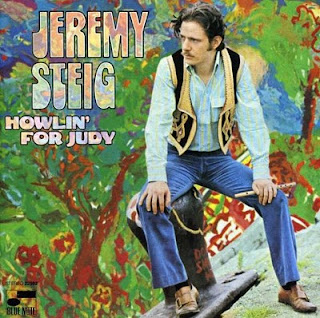 When Hubert Laws left CTI, Creed Taylor felt he needed a new flute player for his label and signed Steig in 1976. As usual on CTI, the producer featured the recently signed artist on various albums by other artists: Urbie Green's "The Fox" (one of the best tracks, "Another Star," I've included in the "CTI Acid Jazz Grooves" that I produced in 1997), Lalo Schifrin's "Towering Toccata," Art Farmer's "Crawl Space," Idris Muhammad's best-selling album ever "Turn This Mutha Out," and "Hank Crawford's Back." 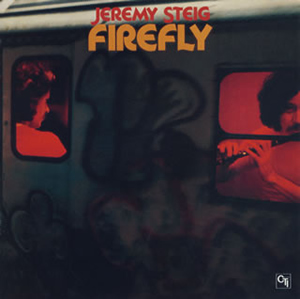 As a sideman, he can be also heard on albums by such artists as Nat Adderley, Richie Havens, Mike Mainieri, Yoko Ono, Johnny Winter, Eddie Palmieri, Bob Moses, Art Garfunkel, Ray Mantilla and several others, often performing on projects by Eddie Gomez. He also wrote the soundtrack for the movie "The Amazing Bone" in 1984.

"Late in March, Jeremy asked me to make videos of him drawing at home on his last days. He talked about various things while working on pictures and suggested that I add soundtracks using his archival flute music to show on his official website," "As if nothing had happened," he said. His home-recording continued for many years in both U.S. and Japan, and it will take time to just listen. Putting together clips will be a slow process. But if you take a look from time to time, you may discover something new that Jeremy has left to us," his widow Asako Steig wrote in a short statement. 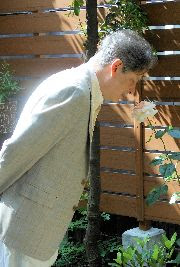 "The rose in the photo is called My Garden, his favorite in our little garden in Yokohama," she said. Rest in Peace.
Posted by Arnaldo DeSouteiro at 10:15 AM

Thank you for your work here.

I just came across your blog. It brought tears to my eyes. Jeremy was a dear friend. His close friend and colleague Adrian Guillary was my boyfriend for many years and the three of us hung out together all the time. Jeremy and I both lived in Greenwich Village and kept in touch over the years. Jeremy told me that he had decided to give up his rent controlled Greenwich Village apartment handed down to him by his father, to move with Asako to Japan where he believed he would live a longer and healthier life. Shortly after settling in, the tragedy at Fukushima happened and then terminal cancer ended his life.

There are certain people in one's life that leave an indelible impression and Jeremy was one of those people for me. He gifted me with over 100 paintings that are now being handled by The Emerge Gallery in Saugerties, NY. I instructed the gallery owner to make sure that the cost of the paintings was affordable to even the poorest musician and artist.

I feel deep gratitude for having known Jeremy and been fortunate enough to have spent so much quality time with him. It is deeply moving that he entrusted his art collection to me. "You will know what to do with it" were his parting words!