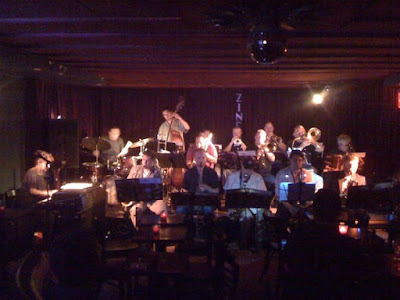 In 2010, Cecilia became a big band leader of significance. She told her friend, trumpeter/music publisher Don Sickler, that she'd love to pen some big band arrangements and asked for his thoughts. "The most helpful thing that Don said to me," she recalls, "was to make sure that I started with a sketch. I looked at my quintet arrangements and realized that they all had potential for a big band. I wrote two arrangements right away - and then things snowballed."

After having written many arrangements in a short period of time, Cecilia naturally wanted to hear what the music sounded like, so she recruited her own ensemble. "What essentially started as a rehearsal band quickly turned into a serious endeavor, due in large part to the overwhelming support I received from other musicians. After rehearsals, they'd phone or write to say how much they enjoyed my music and tell me that I had to keep this thing going. They've been extremely supportive and enthusiastic, which makes this extremely rewarding for me. In fact, the big band has become the love of my life."

With New York's pool of accomplished jazz players to choose from, she expanded her arranging scope and palette. The eighteen-member CeciliaColeman Big Band, which includes six saxophonists (one of them a fulltime soprano player) has a regular gig at The Garage in Greenwich Village. They've also played at Zinc Bar, Fat Cat, the Baha'i Center, Trumpets and the Saint Peter's Church "Jazz At Midday" concert series.

"Oh Boy," the band's debut recording, recorded at Rudy Van Gelder's famed New Jersey studio, was released in 2011 on the PandaKat label.  "Cecilia has done a lot of work for me," says Sickler, who served as producer.  Though it's really tough to have a big band these days, she works extremely hard.  She's determined to do this thing and will never give up!"

In short, Cecilia Coleman has developed into an exceptional composer whose distinctive, varied pieces reflect where jazz has been - and where it is going.
www.ceciliacolemanbigband.com

Tickets will be sold at the door,or call 212-222-5159 for reservations and information.
For more about acts at "Jazz Tuesdays", check out their website at www.jazzbeat.com