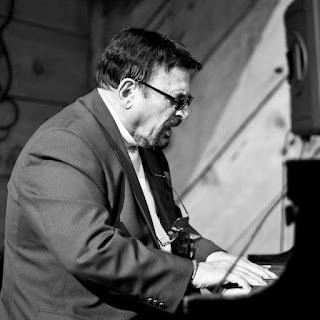 Mike Longo's funk band is playing Trumpets Jazz Club in Montclair, NJ on April 9. Featuring Christian Fabian, Sam Burtis (yessss! the trombone master who recorded those fiery solos on Deodato's "Havana Strut" and "Amani" in the 70s), Bryan Davis, Mike Campenni & Daniel Walsh. Not to be missed, specially if you are a fan of Longo's cult albums from the 70s!

It was in the mid-60s when Longo’s trio was playing at the Embers West, that Roy Eldridge told Dizzy Gillespie about this new pianist he had heard.  Dizzy came to hear him play and soon asked him to become his pianist. This started a life-long musical relationship and friendship. From 1966 through 1975, Longo worked exclusively as Dizzy’s pianist and musical director.

Mike left the Gillespie group officially in 1975 to venture out on his own, but continued to work for Gillespie on a part-time basis until his death in 1993. Since that time Mike has recorded numerous albums and CDs on various labels with some 45 recordings with artists such as Gillespie, James Moody etc. At present he has over 20 solo albums to his credit. He is sought after as a music instructor and is in demand for jazz clinics and concerts at universities and music schools throughout the world, and has appeared at the Lincoln Center’s new jazz room “Dizzy’s Club Coca-Cola.”

Longo is founder and President of Consolidated Artists Productions (CAP), an independent recording label, that has released great albums by Russ Kasoff, Mark Sherman, Wally Dunbar, and the late Havana Carbo, among others.
Posted by Arnaldo DeSouteiro at 10:14 PM