Made in New York Jazz Gala, May 21 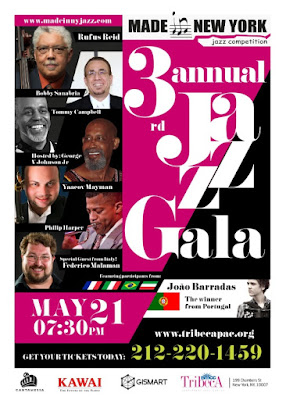 The Made In New York Jazz Gala became one of the most significant International jazz events in New York, featuring legendary Jazz Artists. This year we celebrate the 3rd Annual International Jazz Gala!

The winner of the competition João Barradas, one of the most recognized young accordionists in Europe, will be performing this year.

“I regard João Barradas as a beacon in the future development of accordion as a serious instrument.  He is a master of all styles from classical repertoire and is the most convincing jazz improviser I have heard to date on the instrument.” – Gil Goldstein

João Barradas and other participants TBA of Made In New York Jazz Competition will be joined by stellar lineup of American jazz masters:

Rufus Reid, one of today’s premiere bassists on the international jazz scene, with his reputation firmly established in the education arena.

Tommy Campbell (known for his work with Dizzy Gillespie, Sonny Rollins and others), Philip Harper (The Jazz Messengers and Charles Mingus Big Band),

The host of the GALA 2016 will be George V Johnson Jr., one of the most recognizable jazz voices who mentored and performed regularly with “James Moody & Lou Donaldson”.

Special guest from Italy: Federico Malayalam from Italy! Internet sensation and one of the most watched jazz, fusion bass players on YouTube and social media. Some of his videos performing have well over a million views, displaying great musicianship and a technical ability that is jaw dropping.

The Made in New York Jazz Competition enters its fourth year in 2016, featuring a worldwide audience of jazz fans, as well as a slate of musicians from 47 countries and counting.

“The talents keep surprising us every year! It’s great to be part of this discovery process. Our community grows very fast, just last year the competition was ranked as number one jazz competition in Google, Yahoo and Bing. This is an incredible feeling to see some of the artists succeed after participating in Made In New York Jazz Competition” – says Misha Brovkin, founder of the competition.

Posted by Arnaldo DeSouteiro at 11:14 PM