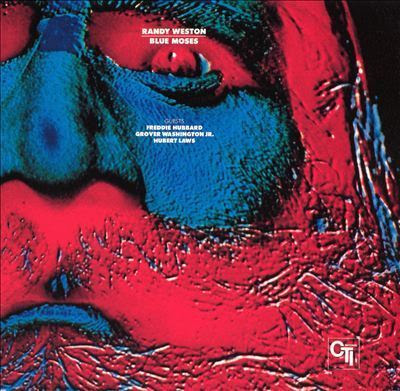 Randy Weston -- now an elderly gentleman and one of the few living witnesses and co-creators from the heyday of hard bop -- still leaves his home in Brooklyn to tour through Africa, Europe and Asia. A truly multicultural man. His percussive piano style has been influenced in particular by the ethnic music of Morocco; his amazing sense for the sounds produced by North-African melodic and rhythmic instruments has enriched his music over many years.

After seven years without making any recordings, "Blue Moses" was recorded in 1972 at Rudy Van Gelder’s studio. Lengthy trips through North Africa and as far as the Niger, plus the ignorance of American record companies, were the reasons for the long pause. Finally the CTI boss Creed Taylor took an interest in Randy Weston and financed a large ensemble with Don Sebesky as arranger/conductor.

The four themes provide a great basis for improvisations by the soloists, whereby the Randy Weston’s piano takes the lion’s share. The flute is also very prominent – and no wonder: all flute solos are by Hubert Laws.

"Blue Moses," the most commercially successful album in pianist/composer Randy Weston's career, remains one of his most controversial due to his conflicted feelings about the final product, which he feels is too polished and too far from his original intent for the project. Indeed, appearing on Creed Taylor's CTI imprint was an almost certain guarantee of polished production.

It's one of my favorite albums in the entire CTI catalog -- I had the honor to supervise its first CD reissue ever, released in Japan back in 2000 -- and, IMHO, Weston's best album ever. He plays exclusively Fender Rhodes piano here in his unmistakable style, backed by a band of CTI's star-studded stable: trumpeter Freddie Hubbard, tenor saxophonist Grover Washington, Jr. (I consider it as Grover's best session ever for CTI), flutist Hubert Laws, drummer Billy Cobham, bassists Ron Carter and Bill Wood, and percussionists Phil Kraus (marimba), Airto Moreira (mostly on caxixis), and Weston's son Azzedin (on the congas and on Afro-percussion instruments like the kakobars.)

"Blue Moses" consists of four compositions; it was an attempt by Weston to showcase the influence "Ganawa" music from Morocco had on him as a composer. The opening track, the hard-bop waltz "Ifrane," says it all, with a frenetic and splendid interplay between soloists Freddie Hubbard, Grover Washington, Jr. and Billy Cobham.

"Ganawa (Blues Moses)," with its frenetic, minor-key piano lines, knotty, Middle Eastern Eastern-sounding charts, and skittering North African rhythms push the listener into a new space, one that stands outside of CTI's usual frame in, and into, the exotic. The brass arrangement is sumptuously wild, and while that might overshadow some recordings of lesser substance, Sebesky knew what he had in Weston's tunes, and reigned his players in just enough to keep the dynamics fresh, open, and full of engaged call-and- response playing between Weston, Hubbard, and Laws. The use of French Horns is equally an additional proof of Sebesky's genius.

So too, album closer "Marrakesh Blues," with wordless backing vocals by Madame Meddah, twinned trumpet and flute lines, gorgeous electric piano solos, and a deep, strolling bassline. It's an Eastern modal blues with the sound of a horn section to boost its drama. The way Sebesky employs David Horowitz's Moog synthesizer on this track, using it as a member of the horn section, is also quite impressive.

"Night in the Media" is a labyrinthine, more abstract piece, but utterly atmospheric and colorful in its arrangement, with exciting interplay between Weston's enormous chords and Washington's swinging, soulful saxophone and Airto's percussion & vocal effects that create a lithe, spiritual jazz groove. It's the only track on which Bill Wood (then a member of Weston's touring band) replaces CTI's official bassist Ron Carter.

No matter how Weston ultimately feels about "Blue Moses," this date succeeds on all levels. Creating a commercially viable recording from the elements presented must not have been easy, but Taylor rose to the occasion and delivered a grooving beauty of an album without compromising Weston's genius. It is quite possible that many jazz fans will have missed the name Randy Weston when flipping through the letter 'W' in record shops in the 70's. Now they have the opportunity to correct this mistake with this re-release.
Posted by Arnaldo DeSouteiro at 11:16 PM