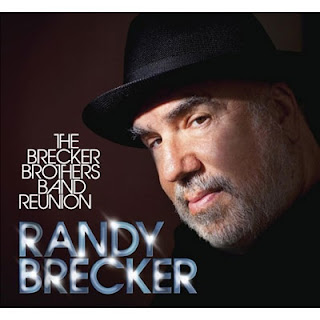 CD/DVD Set of the Month

A killer set by Randy Brecker, paying tribute to the legendary fusion band The Brecker Brothers that he co-led with the much missed sax genius Michael Brecker. After the European release, we now have a domestic U.S. issue keeping the deluxe packaging with a beautiful gatefold cover.

On two tracks - "Adina," dedicated to Ava, and "Stellina," dedicated to their daughter Stella --, Randy plays flugelhorn, while rapping under the nickname Randroid on two songs: "Really In For It" and "On The Rise." He also sings on the surprising lament "Musician's Ol' Lady Dues Blues," backed only by Adam Rogers on guitars.

Disc 2 founds Randy, Ada and the rhythm gang (bassist Will Lee, guitar ace Mike Stern, virtuoso drummer Dave Weckl, keyboardist & producer George Whitty plus special guest singer/keyboardist Oli Rockberger) smokin' @ the NYC Blue Note (date not mentioned on the booklet). Anyway, it's a splendid performance with 6 tunes also available on the studio versions (opening with the fiery "First Tune Of The Set," then "The Slag," the latin-tinged "Adina," "Really In For It," "Stellina," "Merry Go Town") but that sound even better on the live date.

The band also plays three Brecker Brothers classics: "Inside Out" (from "Heavy Metal Be-Bop"), the title track from "Straphangin'" and another theme from "Heavy Metal Be-Bop," the fusion anthem "Some Skunk Funk" played as the encore, "as fast as humanly possible," like Randy announces. In all aspects, Ada leaves a strong impression, displaying her personal style without feeling intimidated by the not easy task of "replacing" Michael Brecker. Instead of trying to emulate him, she does it her way and succeeds brilliantly.

The Brecker-Rovatti interplay is amazing, with the couple often making good use of electronic devices applied to their horns. The interaction between the other band members is equally flawless, and all the solos are full of magic, passion and complete control of technique.

Randy dedicates the project not only to Michael Brecker but also to other musicians who played with band in the 70s and 80s and already left Earth too soon: Hiram Bullock, Don Alias, Ralph MacDonald, Luther Vandross and "honorary Brecker Brother, our mentor" Barry Rogers.
Posted by Arnaldo DeSouteiro at 11:15 PM