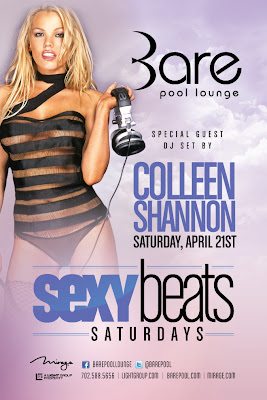 The hottest female DJs take over every Saturday! This next Saturday, April 21, Bare is proud to present the most beautiful female spinstresses we could get our hands on...get ready for the "World's Sexiest DJ", Playboy's 50th anniversary playmate Colleen Shannon! Kick it by the pool and soak up the Sexy Beats Saturdays at Bare!

1 OAK Nightclub
Tuesday Night at 1 OAK featured the Grand Finale of the red hot industry contest, “Get Rich or Party Trying.” The XS and Tryst Team took the Big Check for $50k home and the Trip to NYC went to team TNT (Noah Auspitz and Tony Marcum). Playing as a DJ Duo, Vegas favorites DJs Karma and Ikon made the night with amazing music and lots of energy.
Friday Night, Robin Thicke performed an unforgettable set, as he literally took the party everywhere in the Club including the Dance floor, in the middle of the Crowd!
Saturday 1 OAK’s massively popular “I Love New York” series continued with guest DJ Jus Ske, on fire all night bringing all the NYC energy to the Sin City!

HAZE Nightclub
Thursday we had the pleasure of having the turntable prodigy A-Trak spin at HAZE. He flew all the way from France to bless us with his world renowned remixes, scratching, and part rock style to the club. DJ Karma started the night off, serving the best flavors for your ear to dance to all night. The club was packed with party goers and the drinks didn’t stop until the lights turned on. Even Calvin “Megatron” Johnson from the Detroit Lions was in the building, popping bottles of champagne with his closest friends. A-Trak jumped on the decks, literally! He started the night was a mix of electronic and trance, while mixing in chords and hooks from Kanye and Jay Z while standing on top of the DJ booth. A-Trak started didn’t just crush Thursday night, he remixed it all together!
“In The House Fridays” featured DJ Stellar rocking the best house and dance music in the country. The lines started early Friday night and the dance floor was packed early with ladies. The speakers were booming till the early hours while confetti rained from the sky all night long. The atmosphere was explosive with lasers, beats, and bombshells dancing to the best in house. Another amazing night at HAZE, one DJ Mag’s top clubs in the world!
Saturday we had resident DJ E-Rock spinning on the 1’s and 2’s. The Bay Area native was spinning the best in top 40, hip hop, and all the dance music that makes the people party.

The Bank Nightclub
Friday, April 13th The Bank Nightclub at Bellagio hosted a Special Performance by Iyaz! Iyaz performed his chart toping hits “Replay” and “Pretty Girls” to name just a few. All the ladies in the club were on their feet singing along and dancing to Iyaz’s one of a kind performance. Resident DJ IKON masterfully spun the hottest tracks. IKON rocked the turntables and the energy was electric till the lights came up!
Saturday, the party was nothing short of spectacular! Saturday night at The Bank nightclub started off with a bang as Resident DJ Karma tore up the turntables, the Cryo Jets were going off, and the sounds were memorizing. The who’s who of the beautiful people filled the room and danced the night away.
The Hottest Industry Night in town got a little hotter as The Bank hosted the summer kick off party Babe Watch!! All the local pools gathered their staff to come support and party in honor of the summer pool season kicking off. The energy in the club was out of this world as DJ Karma lit up the turntables, and rocked the house! The place to be and be seen is Industry Sundays at The Bank!
Posted by Arnaldo DeSouteiro at 2:20 PM