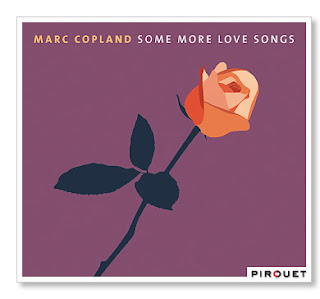 With their subtle magic, these seven tracks on "Some More Love Songs" seem to stop the march of time. Their interpretive magic is not in-your-face emotional; rather, it is emotion that gives space to all of the music's beauty and contradictions. Love songs cannot be any more apropos and genuine than this. And the beautiful and painful power of love can scarcely be depicted more serenely and at the same time intensively as has Copland's trio.

Copland transforms Joni Mitchell's "I Don't Know Where I Stand" (the opening track, previously recorded by the pianist on his 2009 solo effort "Alone," which includes the best jazz takes on Joni Mitchell's tunes ever) in a haunting poem, and performs at least three miracles by offering the most creative renditions in decades of such overdone standards as Richard Rodgers' "My Funny Valentine" (at a much faster tempo than usual), Cole Porter's "I've Got You Under My Skin" (the ultimate highlight) and Victor Young's "When I Fall in Love" (a double miracle, since Copland removes all the saccharine found in 99% of the versions of this song, but preserves all its romanticism). The album also includes a magnificent take on Victor Schertzinger's "I Remember You" (covered by Diana Krall & Claus Ogerman on "The Look of Love"), an unexpected version of Ron Carter's VSOP classic "Eighty One" and Copland's own gem "Rainbow's End."

As I wrote before many times: Marc Copland is one of the best pianists in jazz history, an underrated artist who's in the same creative level of Keith Jarrett and Ahmad Jamal (the only pianists that have been also able to release so many successive wondrous albums in the last decades), all with particular and peculiar musical styles. Not to mention that he is the greatest jazz piano poet since Bill Evans. That said, I can only add that "Some More Love Songs" already deserves to be placed among the best jazz releases in 2012. And Copland has a good chance to be considered the best jazz pianist of the year, like happened in 2003 (for "Marc Copland And..." released by the Swiss label hatOlogy featuring Gress, Rueckert, John Abercrombie and Michael Brecker), 2005 ( "Some Love Songs"), 2006 ("New York Trio Recordings Vol. 1: Modinha"), 2007 ("New York Trio Recordings Vol. 2: Voices") and 2009 ("Alone"), as well as many times before during the 90s.

Born in Philadelphia in 1948, Marc Copland began his professional career in the 60s as an alto saxophonist and, in the early 80s, as an electric keyboardist under the name Marc Cohen. Since the late 80s he has more and more made a name as a pianist with a totally unique aesthetic, recording an impressive body of work. Solo sessions, trio recordings, stunning collaborations with John Abercrombie, Randy Brecker, Greg Osby, Bill Carrothers, Kenny Wheeler, Tim Hagans, Jason Seizer, Gary Peacock. His enigmatically suspended harmonies create textural nuances which have become an unmistakeable trademark.

Copland's expressiveness and "introverted eloquence" is beyond words, he transforms everything he touches. All his sessions for the Munich-based Pirouet label in the 2000s -- an impressive body of work which includes "Alone," Marc's solo adventure, the extraordinary "New York Trio Recordings" series of three CDs with different sidemen, the 2008 release "Another Place" (a quartet session with John Abercrombie, Drew Gress & Billy Hart) and the "Insight" duo with Gary Peacock -- are superlative documents of Copland's unique tonal language and expressiveness in a variety of contexts. On "Some More Love Songs," Marc's ultra-amazing performances are highlighted by the impeccable piano sound captured by engineer/producer Jason Seizer, Pirouet's head, who should receive a medal just for having signed this low-profile genius.
Posted by Arnaldo DeSouteiro at 8:20 AM