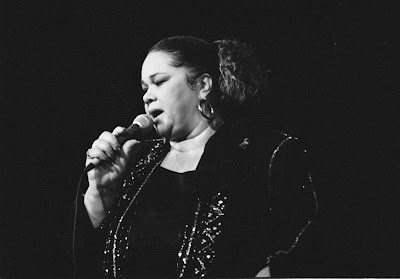 I was fortunate to attend her electrifying performance at the First São Paulo/Montreux Jazz Festival in 1978. Rest in Peace. The LA Times obituary follows.

Etta James, the earthy blues and R&B singer whose anguished vocals convinced generations of listeners that she would rather go blind than see her love leave, then communicated her joy upon finding that love at last, died Friday morning, said her son, Donto James. She was 73.

She died of complications from leukemia at a hospital in Riverside, said Dr. Elaine James, her personal physician.

James had been in failing health for years. Court records in the singer's probate case show she also suffered from dementia and kidney failure. Her two sons had been in a court battle with their stepfather over conservatorship of her $1-million estate. Doctors announced in December that she had chronic leukemia.

James spent time in a detox facility for addiction to painkillers and over-the-counter medications, James, told Reuters in 2010. And she had wrestled with complications since undergoing gastric bypass surgery in 2002 to remedy a lifelong struggle with her weight.

After that procedure, which actress Roseanne Barr had recommended to her, James lost 200 pounds. Before the surgery, her weight had gone past 400 pounds. When she performed, she often had to be escorted on and off the stage in a wheelchair. "I thought I was going to die," she told Ebony magazine in 2003. "I was constantly worried that I was going to have a heart attack."
Perhaps the quintessential R&B diva, James, who was born and lived much of her life in Los Angeles, was equally at home singing unadulterated blues, searing R&B and sophisticated jazz, the latter receiving special attention in her recordings over the last decade. Her dusky voice, which could stretch from a sultry whisper to an aching roar, influenced generations of singers who came after, from Tina Turner to Bonnie Raitt to Christina Aguilera. And Beyonce carefully studied James before portraying her in the loosely historical 2008 film "Cadillac Records."

"This is a huge loss," Beyonce said Friday in a statement on her website. "Etta James was one of the greatest vocalists of our time. I am so fortunate to have met such a queen. Her musical contributions will last a lifetime. Playing Etta James taught me so much about myself, and singing her music inspired me to be a stronger artist. When she effortlessly opened her mouth, you could hear her pain and triumph. Her deeply emotional way of delivering a song told her story with no filter. She was fearless, and had guts. She will be missed."

Despite her early commercial success, James struggled for much of her life with her weight, with addictions to heroin, cocaine and alcohol, and with her tumultuous relationship with her mother, who was just 14 when she gave birth to Jamesetta Hawkins on Jan. 25, 1938.

She was adored by rock's elite, including the Rolling Stones, who drafted her in 1978 as the opening act on their U.S. tour, and voters at the Rock and Roll Hall of Fame, who inducted her in 1993.

"It really does mean a lot," James told The Times upon her induction. "It shows that if you're hanging around the candy store long enough, people start giving you things." James' six-decade recording career began at the top of the R&B charts when her bawdy 1955 single "The Wallflower," better known as "Roll With Me Henry," quickly made her a national star.

In the rollicking early days of rock 'n' roll, James' saucy song answered Hank Ballard's then-recent hit "Work With Me Annie," a ribald, thinly veiled invitation to a woman to have sex. James' response, in which she assertively put forth the same offer on her own terms, was wildly popular but equally controversial coming from a 17-year-old girl long before the sexual revolution of the '60s upended traditional sex roles.

She is best known for "At Last," the powerhouse ballad that became a hit in 1961 and which has been enshrined in the Grammy Hall of Fame. Bending and stretching the notes of the bluesy melody to reflect the hard-won realization of a lifelong desire, and channeling a sense of joy that sounded as though the gates of heaven had just opened to welcome her in, James sang: "At last, my love has come along / My lonely days are over / My life is like a song."

The other song with which she became inextricably connected was "I'd Rather Go Blind," which she said she co-wrote in 1968 with her friend Ellington Jordan while he was in prison. He outlined the song and James finished it, but for tax reasons she gave the co-writing credit to Medallions singer Billy Foster, to whom she was briefly married. It conveys the desperation of a woman who prefers losing her sight to seeing her man with someone else. Rolling Stone critic Dave Marsh included it in his 1999 book "The Heart of Rock and Soul: The 1001 Greatest Singles Ever Made." It was subsequently recorded by artists including Rod Stewart, B.B. King, Koko Taylor and Beyonce in "Cadillac Records," but it remains most closely associated with James.

James, the child of a single teenage mother growing up in South Los Angeles during World War II, never knew her father but remained convinced throughout her life that he was pool shark Minnesota Fats.

With her blond curls and light complexion, she stood out in the African American community, and she started to make a mark singing in the choir of St. Paul Baptist Church. The church's music minister, a prominent figure in gospel circles known as Professor James Earle Hines, quickly singled her out for solos when she was just 5 or 6, said biographer David Ritz.

The church was frequented by Hollywood stars such as Lana Turner and Robert Mitchum and had a weekly radio broadcast that helped spread word of the girl's talents. James' mother left her to be raised by foster parents, but when her foster mother died when James was about 12, she was reunited with her biological mother and they lived for a time in San Francisco.

As a teen, James formed a trio called the Peaches, which was discovered by R&B musician and promoter Johnny Otis (who, coincidentally, died Tuesday at age 90). Soon, she was in a duo called Etta and Harvey with Harvey Fuqua of the Moonglows, the R&B group behind the 1955 hit "Sincerely." Early on, she toured with Johnny Guitar Watson, the Texas singer, songwriter and guitarist, in an association that figured prominently in her approach to music for the rest of her life.

"Her real role model was not a woman, it was Johnny Guitar Watson," said Ritz, James' collaborator on her 1995 autobiography, "Rage to Survive." "Johnny also could do all three things: blues, R&B and jazz.... Where he really influenced her was in his vocals. He would sing standards and then kind of bluesify them. Just as Nancy Wilson modeled herself on Little Jimmy Scott -- a man -- Etta James modeled herself on Johnny.... He had an enormously healthy and rich influence on her."

She also fell under the positive and negative influences of musicians she revered, such as Billie Holiday, as well as some with whom she crossed paths on the road, including Ray Charles and Chet Baker, all of whom struggled with addiction. "All of my role models at that time, the ones I looked up to most, were heroin addicts," she told The Times in 1993. "I think subconsciously I thought that was a cool thing."

In the mid-1970s, after getting caught writing bad checks to support her drug habit, James was offered a choice between prison or rehab. She chose the latter and kicked heroin, but she started using cocaine a few years later. A spiritual epiphany led her to give up cocaine and alcohol, and in the 1980s she began a personal and professional renaissance, reestablishing her credibility in the music world.

She coaxed esteemed R&B producer Jerry Wexler, who had been pivotal in the careers of Aretha Franklin, Ruth Brown, Otis Redding and many others, out of retirement to oversee her 1993 album "The Right Time." At the time, Wexler said, "I've never done anything better, and I've done a lot of records."

Those works became family affairs when she enlisted her sons, Donto and Sametto James, as co-producers. The family moved to Riverside around the time of the L.A. riots because James said she had had enough of gang violence and other troubles in South Los Angeles.

In addition to her two sons, James is survived by Artis Mills, her husband of 42 years; and several grandchildren.
Posted by Arnaldo DeSouteiro at 8:20 AM