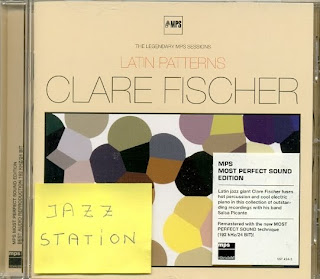 Fire and ice. Pulsating latin percussion and cool, abstract fender rhodes. Clare Fischer is a sorcerer of sounds. More than merely a talented musician, he is a gifted painter of notes and an ever-rare orchestrator of colors. Whatever he plays, composes or arranges has the unique distinction of a breathtaking fusion.

Consider this while listening to Clare Fischer’s electric musings, a generous selection of which is collected here. Recorded between 1978 and 1980 for Hans Georg Brunner-Schwer’s innovative MPS Records, these fourteen songs – many of them Fischer originals -- are some of the richest sounds conjured in a long career sparkling with unique and memorable music.

Born on October 22, 1928, in Durand, Michigan, Clare Fischer began his musical life playing tuba and violin in grade school. He started studying the piano when he was nine and by high school, he’d taken up the cello, clarinet and saxophone too. A high school instructor recognized his budding talent and provided free lessons in theory, harmony and orchestration. By 15, Clare had his own band and was writing all the arrangements too.

While in school, he had studied everyone but clearly developed his own personal style and approach. Such diverse masters as Stravinsky, Shostakovich and Duke Ellington influenced him, but he also took in the palettes of Earl Hines, Art Tatum, Meade Lux Lewis, Bud Powell, Nat King Cole and Lee Konitz. "My music," Fischer says today, "is a manifestation of my training, which is equal parts academic and street training." Through Latin roommates at school, he learned to speak Spanish and became fascinated by Cuban music. Later he became interested in Brazilian music, long before the arrival of Bossa Nova in the United States.

Heading to Los Angeles in 1957, Fischer found work crafting arrangements for the Hi-Lo’s, Gene Puerling's highly popular and influential singing group. Fischer became the Hi-Lo's musical director for five years, arranged for some of their Columbia and Reprise albums, and toured the world as the group's pianist. During this time, he also arranged Donald Byrd’s SEPTEMBER AFTERNOON (Discovery, 1957) and came to prominence as the arranger of Dizzy Gillespie’s A PORTRAIT OF DUKE ELLINGTON (Verve, 1960). In his liner notes for one of Fischer's MPS albums, the noted jazz critic and lyricist Gene Lees recounts his initial reaction upon hearing that Dizzy Gillespie album: "Once during my tenure as editor of Down Beat Magazine, Dizzy Gillespie told me he was going to make an album with a superb young arranger he'd encountered. He continued at some length about the scope and the depth of the young man's abilities. Some years later, Verve released an album titled A PORTRAIT OF DUKE ELLINGTON. The orchestral writing was nothing less than brilliant, but, alas, the album gave no arranger's credit. The writing sounded like Ellington, yet not like Ellington; like Gil Evans but not like Gil Evans. It was in fact apparent that the arranger had studied everything and everyone and then developed his own highly personal approach to writing. Unable to reach Dizzy by telephone, I set out to find out who had done this remarkable writing. It turned out to be the young man about whom Dizzy was so wildly enthusiastic, and this time I did not forget his name: Clare Fischer."

Fischer quickly became one of the busiest jazz and studio musicians in Los Angelese and arranged and recorded for Pacific Jazz with such West Coast luminaries as Bud Shank, Joe Pass and the Jazz Crusaders. He joined Cal Tjader in the early 1960s, recording often with the great vibes player and Latin jazz’s first great populist. As a leader Fischer recorded prolifically throughout the 1960s and 1970s for such prominent labels as Columbia, Atlantic and Revelation Records.

In the early 1970s, former Hi-Lo’s Gene Puerling and Don Shelton had found new success with the Singers Unlimited, four singers who made complex harmonies sound like an elegant breeze. The vocal quartet, originally founded for radio and TV advertising jingles, recorded regularly for the German MPS label in Villingen, Black Forest. Fischer was invited to arrange the fabulously swinging orchestra that backed the quartet on their funky album, A SPECIAL BLEND, in 1975.

After recording the instrumental backing tracks in Hollywood, Fischer travelled to Villingen to take part in the recording of the vocal overdubs. MPS owner Hans Georg Brunner-Schwer struck an immediate relationship with Fischer and, on the spot, decided to record the pianist's solo album, ALON TOGETHER, on the Brunner-Schwer Steinway, a legendary piano in the producer's living room which also produced exceptional sounds from Oscar Peterson, Monty Alexander and other pianists. During Fischer's six day stay in the Black Forest, he and Brunner-Schwer also recorded yet another solo album, CLARE DECLARES, a jazz album with a daring concept, recorded on an historic pipe organ located at Brunner-Schwer's summer residence at the lake of Konstanz.

Brunner-Schwer and Fischer kept in touch and formed an ongoing relationship (a very common thing for people who work with Clare Fischer). Four albums ensued: SALSA PICANTE (1979), MACHACA (1980), both recorded with a group of native Latin American musicians headed by Fischer and named Salso Picante; CLARE FISCHER AND EX-42 (1980), a quartet recording with Fischer on the electronic organ of the same name; and FOREIGN EXCHANGE (1981), , an album which added an ethereal quartet of vocalists to the Salsa Picante concept. This compilation features tracks from these four MPS albums.

"Minor Sights," Clare tells me, "is an English abomination of the German ‘Auf meiner zeits,’ which means ‘on my behalf’." "Morning," is a Fischer original that has evolved into a classic of the jazz standard repertoire. It’s heard here as an instrumental and with the vocals of Foreign Exchange. Not surprisingly, Clare crafts his singers within the tonality of his group on these recordings, blending the beauty of sounds each brings to the other. It’s not singer and backup. In his linernotes for the album FOREIGN EXHCANGE, Fischer describes his approach towards recording with these singers: "When I first organized Salsa Picante, I had been thinking about the use of four singers to appear with the group. The opportunity was now given to me and I set out to audition singers. What I needed were vocalists with good ears, some linguistic ability and interest, some extra vocal range to sing with the Latin Jazz concepts. My choice were Darlene Koldenhoven, Mary Hylan, Amick Byram and John Laird. About the time of the third rehearsal I noticed a special spirit developing and at the same time the beginning of a blend. The heaviest of the load fell on my two sopranos and especially Darleen. What I needed was akin to splitting two trumpet players in a shouting brass section, one able to spell the other if needed. However, every time the lead changed, the need to readjust the blend varied. Darlene had been singing solo and mostly in her lower range so the demands made on her range were severe. Little by little strength and endurance grew until the upper ranges solidified. When, after a private rehearsal, they sang the end of 'Leavin' and the hair on the back of my neck stood at attention, I knew they had arrived."

Foreign Exchange is also heard on "Du, du liegst mir im herzen," which according to the Germanic Mr. Fischer, "is a German song my father sang to me when I was a child. I welcomed the opportunity to perform it here in German." A touching rendition of the same song is included on Fischer's solo piano album, ALONE TOGETHER.

"Clavo," is a bossa that rocks in a most unusual 3/2 time. The title comes from the word ‘clavichord’ and is the name Clare Fischer was given by members of his band. "Bachi," is, according to Clare, "named after a wonderful black poodle who shared my children's and my life for 15 years." Check out Clare’s cover of this lively piece (and "Funquido" and "Novios" too) with Cal Tjader on HURACAN (LaserLight). For that matter, hear Fischer fire Tjader’s remarkable HERE AND NOW (Fantasy) too.

"Round Midnight" is a nice contrast to the feel of dawn Clare conjures in "Morning." The haunting Thelonius Monk canvas finds Fischer superbly crafting the romantic colors and dark moods of nightshade using his electronic organ and his EX-42. "Crystal Sunrise," a composition by saxophonist Tom Scott, is highlighted by Fischer's fierce organ solo.

"Suddenly," according to Clare, was written after the sudden death of a friend. "Novios" is a romantic, lyrical piece that comes out of Fischer’s Stravinsky influence. Barbara Ransom later added English and Spanish lyrics (for the album FREE FALL, Discovery, 1985) to tell the story of a boy and a girl who do not speak the same language, so fascinated by each other that they find something similar to express to one another. "Gaviota," (Sea Gull) ascends with the poetic imagery of a sea gull gliding along oceanic currents of air. Fischer expertly suggests this by mixing a "quasi bolero" with a Guarija like rhythm.

Since his MPS recordings, Clare Fischer has established lasting, rewarding recording relationships with the Trend/Discovery and Concord Picante labels. Most recently, he was captured with the Dutch Metropole Orchestra for the magnificent THE LATIN SIDE (Koch). As a busy arranger he has added the lovely orchestral colors to Prince's black and white movie extravaganza UNDER THE CHERRY MOON (remaining an ongoing collaborator with his purple badness on BATMAN, GRAFITTI BRIDGE and GIRL 6 too). He has also arranged for a variety of pop artists such as Rufus & Chaka Khan, Switch, The Jacksons, Earl Klugh, Santana, DeBarge, Celine Dion, Natalie Cole, Tony! Toni! Tone!, Brian McKnight, Amy Grant, Vanessa Williams and, most recently, the soundtrack to THE PRINCE OF EGYPT. Fischer's sophisticated orchestrations can also be witnessed on Joao Gilberto's luch Bossa Nova masterpiece JOAO (Phillips, 1990), and rock singer Robert Palmer's highly underrate trip to Big Band land, RIDIN' HIGH (EMI, 1992)

Clearly, there are very few boundaries for Clare Fischer. But, after all, music is a universal language. "My interest in music," Clare explains, "actually reflects my interest in foreign languages. To me, improvising music and speaking foreign languages are related in that they are both done or thought of in real time. Sounds fascinate me whether they be orchestral, vocal or instrumental."

Listening to LATIN PATTERNS confirms Clare Fischer’s mastery of the language of sounds. His is an alchemy of the natural and the creative: truly the sound of life and the life of sounds. A beautiful sound.

- Douglas Payne
Posted by Arnaldo DeSouteiro at 8:37 AM