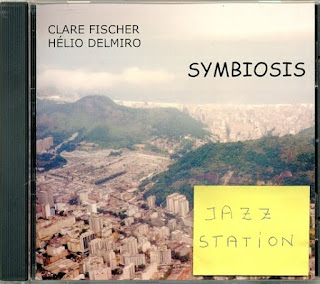 Although very sad with the passing of my dear friend Clare Fischer, I've been re-listening to all his albums in my collection. One of my personal favorites is "Symbiosis," a marvelous duo date with Helio Delmiro recorded in the living room of Clare's house in Studio City, California. The maestro on a Roland digital keyboard (I would have preferred if he had used a Fender Rhodes, I must confess) and the Brazilian virtuoso on an unamplified acoustic guitar.

Produced by Clare Fischer, engineered by Larry Mah, with cover art by Donna Fischer (Clare's widow) and liner notes by Daniel Cytrynowicz, it's also one of the most underrated albums in Clare's entire discography.

Highlights: the standards "My Old Flame" (in an 8-minute haunting rendition), "Autumn Leaves" (I know, I know it's a French song, but it became a jazz standard), Clare's own bossa classic "Pensativa," two Jobim's masterpieces ("Once I Loved" and "One Note Samba," the latter co-written by Newton Mendonça, omitted on the credits), and such Delmiro's gems as "Carrousel", "Pro Baden" and the lovely samba "Dois Por Quatro." Essential. 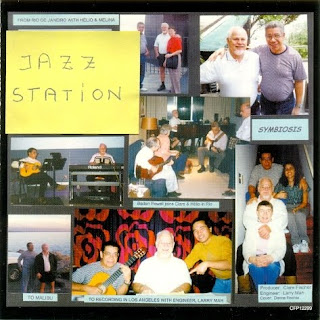 Posted by Arnaldo DeSouteiro at 6:49 AM