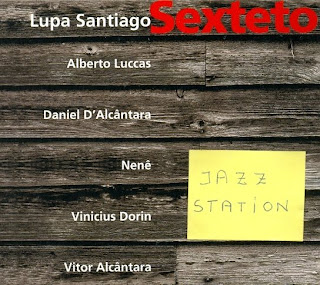 Without imitating any of them, Lupa fuses Jim Hall's refinement with Pat Martino's fluid lines and John Abercrombie's extreme inventiveness. A very creative composer, he travels through challenging arrangements that showcase the free cohesion that characterizes the session. One of my favorite drummers ever, since his days with Egberto Gismonti and Hermeto Pascoal in the late 70s, the "gaucho" Nenê (not to be mistaken with another great drummer, Nenem, from Belo Horizonte) remains a fiery giant that keeps the flame burning throughout the album. He seems to be soloing even when he's not, such is the richness of his free approach. His interaction with the solid propulsion of Alberto Luccas' bass is simply perfect. The two sax players - Vitor Alcântara and Vinicius Dorin - are absolute masters on their instruments. And trumpeter Daniel D'Alcântara, who uses the mute on "Madagascar," could be easily called "the Brazilian Kenny Dorham". A really impressive CD.
Posted by Arnaldo DeSouteiro at 12:56 PM