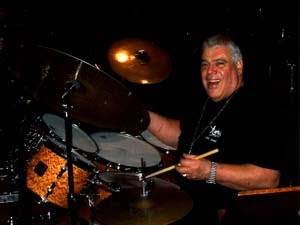 We are also incredibly sadenned to hear the breaking news of the loss of Martin Drew. Martin was the drummer in Ronnie Scott's Quintet 1975-1995 and Oscar Peterson 1974-2004. A tough week all around for the jazz community.

For detailed infos, please visit:
http://www.martindrew.co.uk/
A full obituary of Martin written by Jack Massarik for jazzwise is here: http://www.jazzwisemagazine.com/component/content/article/67-2010/11519-jazz-breaking-news-martin-drew-has-died

Martin Drew, the world-class British drummer who worked for Ronnie Scott for two decades and Oscar Peterson for three, died yesterday. Doctors at Harefield hospital were unable to save him after he suffered a heart attack at his home in Wembley. He leaves a widow, Tessa, a son, two daughters and three granddaughters.

He was 66 and one of Britain’s most internationally renowned jazz musicians. During a long and glittering career he backed countless American stars at Ronnie Scott’s club, a massive list that included Ella Fitzgerald, Dizzy Gillespie, Chet Baker, Dexter Gordon and many more.

Martin was particularly proud of his long association with the Oscar Peterson Trio, working alongside Danish double-bass icon Niels Henning Ørsted Pedersen and the great Canadian piano star at the world’s top venues, including New York’s Carnegie Hall and the Hollywood Bowl, where one of his high-profile sessions with Oscar included the full Count Basie Band.

Born in Northampton, Martin studied with the legendary George Fierstone and turned professional early. His first name gigs were with blind pianist Eddie Thompson’s trio, followed by a quintet with Dick Morrissey, Jim Mullen, John Critchinson and Ron Mathewson, his double-bass partner in Ronnie Scott’s quartets and quintets between 1975 and 1995.

In 2000 he and tenorists Mornington Lockett and Nigel Hitchock formed a Jazz Couriers tribute quintet, playing the music of the original group co-led by Ronnie Scott and Tubby Hayes. This band reformed in 2003 with vibist Jim Hart replacing Hitchcock and Paul Morgan replacing Andy Cleyndert on double bass alongside Lockett and pianist Steve Melling. “As a drummer there was nobody to touch Martin,” said Andy. “That feeling he had, that groove.”
– Jack Massarik
Posted by Arnaldo DeSouteiro at 7:21 AM