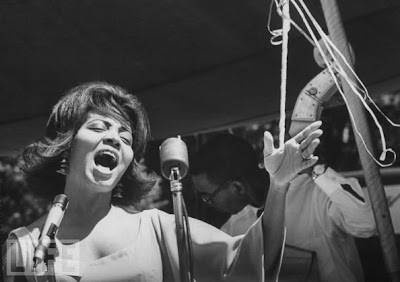 Joya Sherrill, Who Sang With Ellington and Goodman, Is Dead at 85
by Peter Keepnews
New York Times, July 8, 2010

Joya Sherrill, who sang with Duke Ellington as a teenager, toured the Soviet Union with Benny Goodman and was one of the first African-American performers to host a children's television show, died on June 28 at her home in Great Neck, N.Y. She was 85.

Her death was confirmed by her son, Richard Guilmenot III, who said she had been suffering from leukemia.

Born in Bayonne, N.J., on Aug. 20, 1924, Joya Sherrill originally aspired to be a writer. While she was still in high school, her father arranged through a mutual friend for her to meet Duke Ellington so she could sing him the lyrics she had written to his theme song, "Take the 'A' Train."
Impressed by her performance, he asked her to "keep in touch" because he could "always use a good singer in the band," she recalled in an interview with The New York Times in 1979. "I thought that was just flattery," she said, but six months later he offered to hire her when she finished high school. She joined the band in July 1942.

She left briefly to attend Wilberforce University, but returned in 1944 and remained until 1946, when she left again to marry Richard Guilmenot, a construction superintendent.

Mr. Guilmenot died in 1989. In addition to her son, of Great Neck, she is survived by a daughter, Alice Richelle Guilmenot LeNoir, of Manhattan; a sister, Alice Kinnebrew of Atlanta; and two grandchildren.

Although she left the Ellington band and the road, her son said, Ms. Sherrill never stopped singing. She performed and recorded under her own name and continued to work with Ellington on occasion, most notably on his television special "A Drum Is a Woman" in 1957.

"I never really left the band," she said in 1979. "Duke would call me for jobs once a year at least."
In 1962, Ms. Sherrill was the singer in a band assembled by Benny Goodman that performed throughout the Soviet Union. The Goodman tour, sponsored by the State Department, was the first by an American jazz ensemble behind the Iron Curtain.

Ms. Sherrill's rendition of a Russian folk song, "Katyusha," was a regular feature of Goodman's concerts and provoked some controversy. An audience in Georgia hooted its disapproval when she sang it, apparently because she was singing in Russian. The Soviet newspaper Izvestia printed a letter attacking her for singing the song in an "unduly familiar cabaret style."

In 1970, Ms. Sherrill became the host of a children's show on the New York television station WPIX, originally called "Time for Joya" and later revamped to emphasize education and retitled "Joya's Fun School." Although she taped only a few years' worth of original episodes, the show continued to be seen in reruns until 1982.

"Time for Joya" was far from a prime-time network show, but it managed to snag at least one big-name guest: Duke Ellington, who played piano, told stories and joked with the studio audience of youngsters on a memorable episode in 1970. It was one of his last television appearances.
Posted by Arnaldo DeSouteiro at 6:20 AM